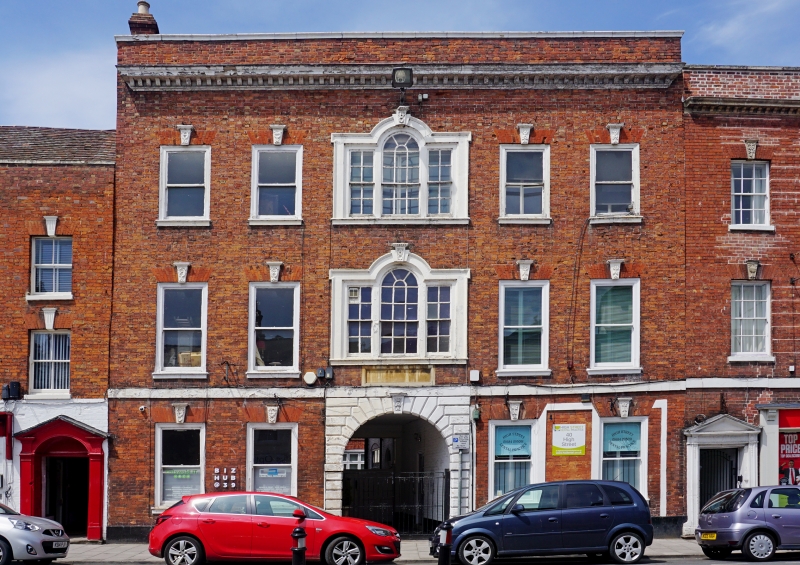 Large double house in row. c1730. Flemish bond brickwork, some
stone dressings, tile roof, brick stacks.
PLAN: an unusually grand wide symmetrical frontage with broad
central carriageway and deep rear wings. The principal
entrance to each is immediately beyond the back of the covered
carriageway, with the staircase flanked by principal rooms on
either side, but detailing differs; the basic building shell
was clearly completed to the requirements of separate owners
at the outset.
EXTERIOR: 3 storeys and basement, 5-windowed. Late C19
plate-glass sashes with broad moulded boxes, brick voussoirs
with decorative keystone to ovolo-mould cornice, and moulded
stone cills. The keystone motif in No.39 differs from that in
No.40. The central window at first and second floors is a
Palladian unit with original 8:12:8-pane sashes plus radial
arched heads. The broad surrounds and sash boxes are moulded,
with triple decorative keystones, and moulded cills.
The ground floor has, to left of centre, 2 inserted doorways,
and there is a blocked former doorway between the windows to
the right. Cement rendered plinth, with basement grille to the
right.
The wide central arch has channelled responds and voussoirs
under a continuous plat band; above this is a recessed stone
panel. A pair of good panelled gates is hung to the rear of
the opening, but the hinge-pins remain in the front opening.
Stone modillion cornice, blocking course and moulded stone
parapet coping, returned at the ends, stopped to a large brick
stack to each gable wall.
The throughway is in plain brickwork, with a 6-panel fielded
door to each side. At the back of the main block is a further
pair of panelled gates to panelled pilasters and a beam.
The wing to the left has a 12-pane sash above a similar sash
with arched head and a 6-panel fielded door under an arched
plain fanlight, and a further large 12-pane sash to the right.
Beyond this is a shallow range connected to a returned C18
range, enclosing a small courtyard at the rear of No.39;
beyond the courtyard is a 2-storey hipped C18 building with a
wide 3-light above a 4-light casement, both with leading.
The right wing is similar, but the stair sash is not arched,
and to the left of the door is a wide 3-pane light to
segmental head. The roof to this wing is hipped at the return.
Beyond the wing is a detached 2-storey carriage house.
INTERIOR: although this was clearly built as one development,
the interiors were separately occupied and fitted out; No.39
has fittings at all levels superior to those in No.40.
No.39 has a ground-floor front room fully panelled, with large
sunk panels to a moulded edge, and inset quadrant corners,
original 6-panel fielded doors in arched moulded architraves
with a fluted keyblock, neat modillion cornice, moulded dado
rail and skirting. The rear room is less ornate, but has 2
cupboards with arched pairs of panelled doors flanking an C18
fire surround. The generous open-well C18 staircase rises
through both floors, and is in polished hardwood, with an open
string and swept handrail on slender twisted balusters, 3 to
each tread. At the first-floor landings are doors similar to
those below, and the front room has an C18 fire surround with
eared architrave (the opening blocked). A further C18 fire
surround at second floor.
No.40 is detailed more economically, with no keyblocks to the
doors, and the staircase is a more austere version in painted
softwood with turned balusters, a moulded solid string and
moulded handrail. This was an unusually grand example of C18
rebuilding in the High Street; it is unfortunate that the
glazing bars have been taken out from all except the central,
Palladian windows.
(Victoria County History: Gloucestershire: London: 1968-:
118).