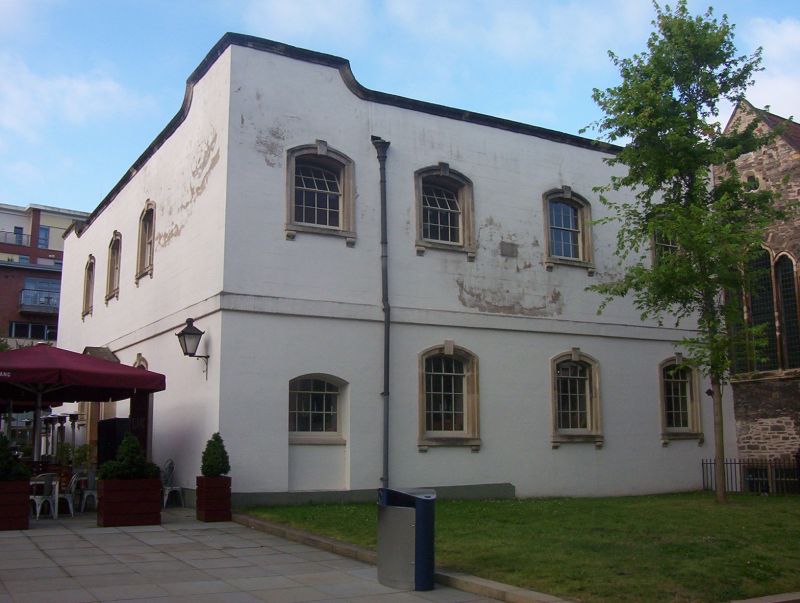 GV
I
Former Quaker meeting house. 1747-9. By George Tully. Stonework details designed and supplied by Thomas Paty, also the contractor. Render with limestone dressings and a leaded roof with hipped Welsh slate roof to a Delabole slate
lantern.
Square open plan. Mid Georgian style. 2 storeys; 3-window range. A symmetrical front with a plat band and moulded, coped parapet, ramped up at the corners. A large, central doorcase has a triple keyed, moulded architrave inscribed 1747, consoles to pediment and a 2-leaf, 8-panel door. Segmental-arched surrounds with sill blocks to flanking 4/8-pane sashes and 3 taller 8/8-pane sashes on the first floor. Similar side elevations each of a 4-window range without doorways. Square lantern has sashes to each face.

INTERIOR: a pedimented inner porch with pilasters and panelled side doors, to a 3x3 bay auditorium, articulated by Doric columns on high octagonal plinths; panelled side galleries to 3 sides between the columns, and keyed, semicircular-arched doorways from the lobby to steps up to them; at the blind W end stood the preacher's desk, in front of a dado and entablature, with stair rails at each end with turned balusters and square newels; central square lantern has a coved ceiling.

FITTINGS: some seating remains in the galleries. The Quakers were established on the site from 1670. An interior of 'noble simplicity' (Ison), restored c1960, with inserted offices. Exceptionally ambitious for a Quaker building and clearly influenced by Wesley's New Rooms (qv).