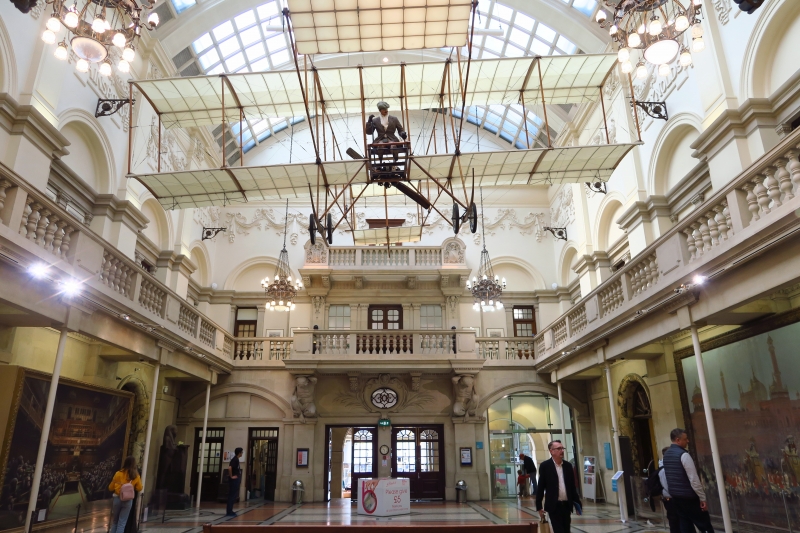 Museum and gallery. Dated 1899-1904. By Sir F Wills. Limestone
ashlar, roof not visible. Rectangular open plan in 2 sections.
Edwardian Baroque style.
3 storeys; 3-window range. A monumental front has a deeply
projecting centre over a porte cochere. Vermiculated outer
quoins to a frieze, modillion cornice and parapet; centre has
a rock-faced plinth to a band, vermiculated ground floor to a
plat band, and paired Ionic clasping pilasters. The centre
section breaks forward, with paired Ionic columns from the
first floor to a pediment surmounted by an outer balustrade
and central pedestal with Beaux Arts statuary.
First-floor half-domed 5-light mullion bow, under a raised
panel inscribed THE GIFT OF SIR HENRY WILLIAM WILLS BART TO
HIS FELLOW CITIZENS 1904, and a large carving of the city
arms. To each side are relief carvings of artists' palettes.
Outer semicircular-arched 3-light mullion windows and a key,
with stained glass; above are swagged panels. The porte
cochere has semicircular arches front and side with coved
reveals and large keys giving on to a vaulted area, with a
semicircular-arched doorway with coved reveals and a cartouche
inscribed 1902, and 2 pairs of half-glazed doors. Side windows
have 3 lights and moulded lintels. Festoon panels over the
outer windows.
INTERIOR: 2 large halls with barrel-vaulted glazed roofs,
separated by a double staircase. The front hall is 6 bays long
and 3 wide, a balcony on carved figure brackets above the door
extends round the sides, and an arcade above with piers to the
roof; reliefs of painters' names to each side bay in swagged
panels. An imperial stair reached through an arched screen, of
Corinthian columns to a second-floor balustrade, supported
over a first-floor balcony by marble columns. Behind is a
further stair with paired columns under a Diocletian wndow.
The rear hall is 4 bays long, a ground-floor arcade of
segmental arches, a Doric frieze and first-floor arcade, with
paired Corinthian columns separated by paired semicircular
arches on marble columns, and a balustrade. Each end has a
Venetian arch under a Diocletian window.
SUBSIDIARY FEATURES: attached rock-faced walls to the front
have 4 good lanterns on pedestals. The building was paid for
by Sir H Wills, and is Bristol's only major public building of
the period. A well contrived and lit interior to match the
weight of the front; '..a free Baroque design of magnificent
proportions' (Crick).
(Gomme A, Jenner M and Little B: Bristol, An Architectural
History: Bristol: 1979-: 391; Crick C: Victorian Buildings in
Bristol: Bristol: 1975-: 62; The Buildings of England: Pevsner
N: North Somerset and Bristol: London: 1958-: 417).