A Grade I Listed Building in Portland, Dorset 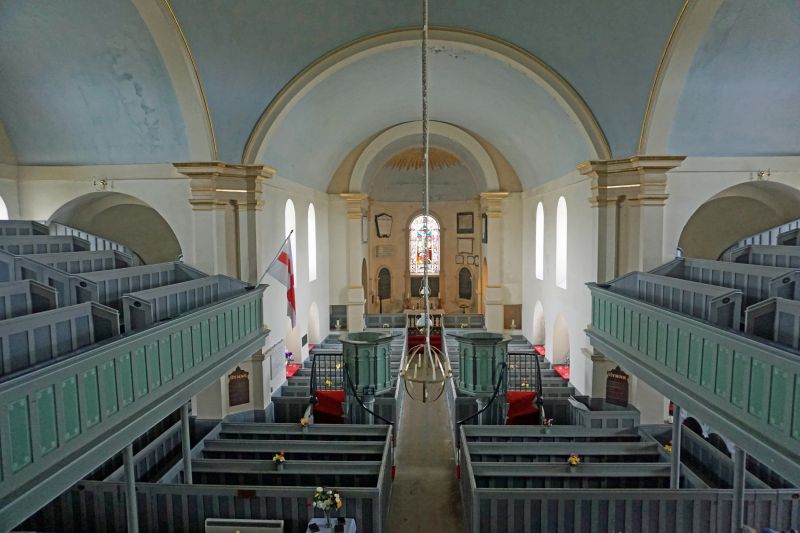 Former Anglican parish church, now in care of The Churches
Conservation Trust. Begun 1754, consecrated 1766; to designs of
Thomas Gilbert, master stone-mason. North porch added early
C19. Portland ashlar, lead roofs, except sanctuary, slate. A
complete C18 church and interior, with some references to
Wren, especially the west tower and steeple, and central low
cupola wider than nave. Cruciform symmetrical unaisled plan
with sanctuary apse and west tower; the crossing dome
expressed externally with a low capping rising above normal
ridge level. Identical north and south facades in two storeys
with arched windows above segmental-headed lights, all
small-pane casements in plain raised plat-bands; 2:3:2 lights.
Broad transept arm has full-width pediment with lunette, and
transept returns have oculus over blind segmental-headed
light. Central arched doorway with fanlight. To right and left
a brought-forward blocking with semi-domed niche over raised
apron panel; window and panel repeated on west face of
blockings flanking the tower which is in 3 square stages and a
fourth octagonal stage with 'pepper-pot' cupola. West front
has window set in former door opening beneath oculus, with
oculus and blind light on returns, then blind arched light to
each face of low intermediate stage below aedicular fronts
with Doric columns carrying entablature with urns at base of
octagonal stage. Apse has central light with stained glass
over a RCF dedicatory panel, with oculus above blank panel to
south and original panelled door to north. Square north porch
has C20 flush doors to north, and blind recessed openings E
and W. Continuous plinth and moulded eaves string course, also
carried round tower.
Interior has been carefully restored, with plain plastered
barrel vaults and central saucer dome on plastered walls and
stone flag floors to aisles. Paired pilasters at crossing and
to chancel entrance, with entablature blocks, plain cornice
band throughout. Galleries on three sides with narrow panel
fronts on paired cast-iron columns; spiral stairs in niches to
E of transepts with balancing niches to W, and tight stone
spiral at tower base to W gallery. Numbered painted box pews
throughout, facing into crossing, special pews flanking
chancel; pulpit and reading desk flank E side of crossing,
octagonal wooden units on stems, with spiral stairs to stick
balustrades and wreathed handrails. Oak communion rail with
turned balusters and moulded rail, painted reredos with Pater
Noster and Credo under stained glass of 1878, flanked by
panels in responds and arches with Decalogue. Circular bowl
font with gadroons, wooden cover at W end, and small pipe
organ in W gallery. Various monuments include one in sanctuary
inscribed: 'Underneath lyes interr'd the body of THOMAS
GILBERT of this island, Gentleman, Architect and master
builder of this ch. departed this life the 25th of July Anno
Domini 1776 aged 70 yrs'; also to John Penn, of Pennsylvania
Castle (qv) died 1834. A full list appears in RCHM volume. The
church, replacing the decayed St. Andrew's (qv), was itself
displaced in 1917 by the completion of All Saints, Easton
(qv), and for long was ill cared for and in poor condition. It
was rescued in 1979 by the Friends of St. Georges, has been
carefully and fully restored, and is now Vested in The
Churches Conservation Trust.
(Royal Commission on Historical Monuments: Dorset: London:
1970-: 247-8; Buildings of England: Pevsner N and Newman J:
Dorset: London: 1972-1989: 341-2).