A Grade I Listed Building in Thorpe, Derbyshire 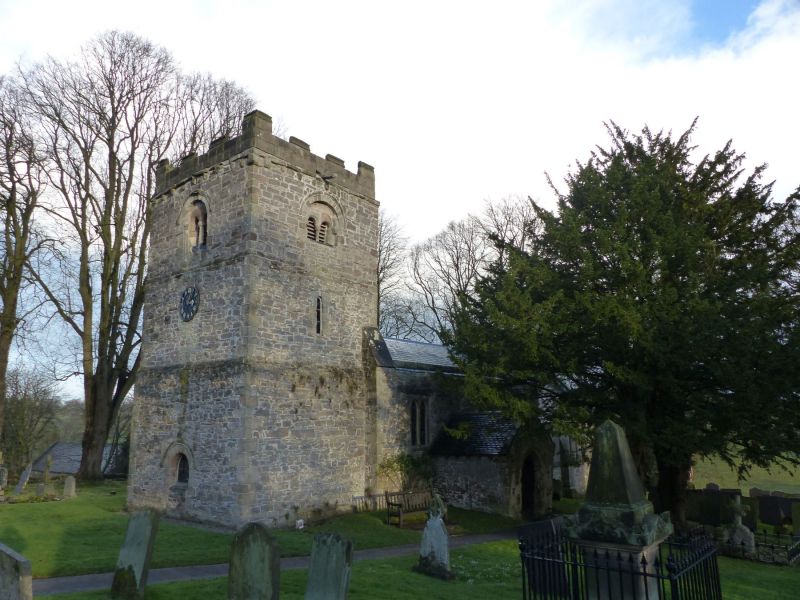 C12 west tower of three stages, each divided by a chamfer.
Flush quoins, Ground stage with a half-blocked, round-headed doorway with a slight
chamfer and dripmould, the upper part now a window. The north elevation with a
small arrow slit. The second stage has to the south a round headed lancet. The
bell stage has to each face 2-light bell openings, set within a blank super-arch
with hoodmould and nook shafts to the west elevation. North, south and east bell-
openings are partly blocked. Corbel table above and later battlements. The south
side of-the nave has a deep, gabled porch with rustic pointed arch. To the left, a
C19 pair of pointed lancets under a flat head. To the right, a 2-light C13 window
with Y-tracery and to the right again, a small lancet with depressed pointed arch and
no dressings. The north side of the nave has two flat-headed post-Medieval mullion
windows, one of two and one of three lights. Chancel rebuilt in 1881. On the south side
at the junction with the nave is a partly re-used 2-light mid-C14 window with a flat
head and cusped ogee lights. To the right, a single lancet, a buttress and a
triplet of lancets linked by a hoodmould with minor arches between each lancet, and
by a string course which runs at sill level on the south and east sides. 3-light
east window with geometric style tracery. Hoodmould with re-used head stops. The
north side of the chancel has a vestry of 1881 under a catslide roof and with a
gabled entrance forming a dormer. Within the south porch, a much restored EE
doorway with single chamfer and a hoodmould. Panelled door.

Early C12 tower arch
of two orders, a step and a roll, and an outer roll moulding. Projecting imposts.
Double chamfered C13 chancel arch on corbels. North chancel arch C19, in a similar
style. Round arch doorway from chancel to vestry. C12 font, much renewed in 1865
when it was restored to the church. Circular bowl and shaft with a cable moulding
between. Mid-C14 cusped ogee-arched piscina in the south wall of the chancel. The
triplet of lancets on the south side are shafted and the sills are taken down to
form sedilia. Early C17 communion rails with turned balusters. On the north wall
of the chancel a tomb chest monument to John Millward, died 1632, with standing
figures against the chest. Stained glass - west window 1950 by A F Erridge. Nave
north east c1930 by F C Eden. Chancel south west, also 1930, by F C Eden. East
window of 1893.