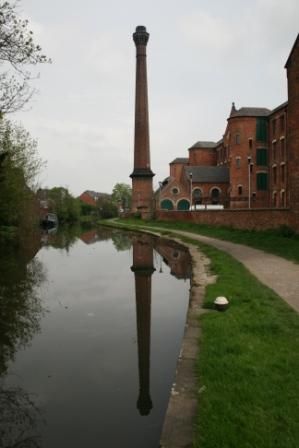 Lace factory and attached chimney. 1888 with minor later
alterations. Built for Terah Hooley, a wealthy local
industrialist, by architect John Sheldon of Long Eaton. Red and
yellow brick with red, yellow and blue brick and stone
dressings. Hipped slate roofs, partly replaced in corrugated
asbestos with red and yellow corbelled and dentilled eaves
cornice. Four storeys and 41 bays, with five central bays
pedimented and built of contrasting yellow brick instead of the
red brick used elsewhere. All bays have full height stepped
pilaster buttresses between with shaped iron tie heads on each
to each floor, which are inscribed 'TH'. The two buttresses to
either side of the five central bays have stone capitals.
Ground floor windows have segment heads with three courses of
yellow brick below one course of blue brick, rounded jambs and
small pane iron windows with small opening casements. Five
central bays have red brick heads instead of yellow but are
otherwise the same except the central bay, which is narrower
than the others. Some windows have been replaced by C20 doors.
First and second floors have similar windows but top floor has
flat headed iron windows with moulded stone lintels. The five
central top floor windows are now blocked in with brick. Above
these is a large shaped gable with moulded stone copings, ridge
and eaves ball finials and a central crowstepped panel of red
brick. Within this is a large clockface set in stone surround
with ogee headed cable moulding to edge, set on bracketed stone
plinth inscribed 'A 1888 D'. Rear elevation is similar except
central bays are built of red brick and there are four full
height staircase towers with rounded ends, small segment headed
windows following the line of the steps up and large segment
headed hoist doorcases to sides. Central gable has a yellow
brick crowstepped panel with central clockface. Attached to
centre of building is a lower wing which in turn attaches to the
engine house which has semi-circular headed windows with
circular one in the gable over, and a louvred ridge vent. From
this runs a large pipe which connects to a very tall brick
chimney. This has a deep square brick base with a large moulded
stone plinth, over which is the tall tapering octagonal stack
with moulded band near the top and a richly corbelled crown.
Interior of factory has wooden floors on cast iron columns.
Engine with rope drive to all floors removed c1940. Total
capacity of the factory was originally 160 machines.