A Grade I Listed Building in Sandiacre, Derbyshire 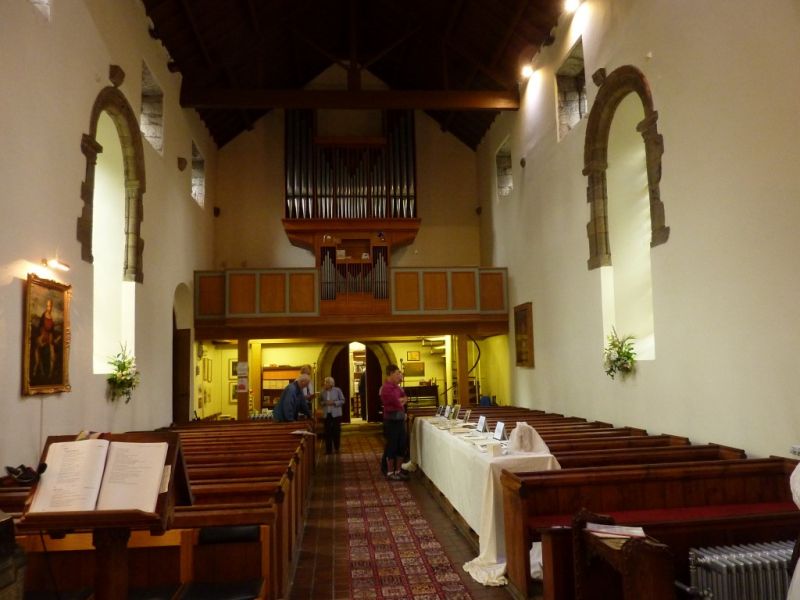 Parish church. Cll, C12, C13, chancel erected c1342 when Bishop
Norbury of Lichfield held prebend of Sandiacre, and C15. Church
restored in 1855 and again in 1866. Coursed rubble with quoins
to nave and lower part of tower with coursed squared stone to
clerestory, ashlar elsewhere. Steeply pitched slate roofs; with
moulded stone coped gables, topped by ridge crosses, to chancel.
Chamfered plinth to nave and tower, and deep moulded plinth to
chancel. Chancel also has continuous moulded sill bands and
hoodmoulds, a deep frieze of blind quatrefoils with band of
fleurons below, at eaves level and low parapets with moulded
copings. Nave, chancel, west tower and south porch. Tower has
a very tall first stage with clasping buttresses to western
corners reaching about half way up, and a narrower short second
stage above. First stage has central chamfered C13 lancets to
each side with short buttresses below. Above there are double
lancet, louvred bell openings to each side set in chamfered
pointed surrounds. Above again is a C13 broached stone spire
with two sets of cusped ogee headed lucarnes to four sides.
North nave elevation has a central C12 semi-circular headed
window, with roll moulded arch and nook shafts plus outer billet
moulding, which has been lengthened considerably at some stage.
C15 clerestory above has three irregularly placed 2-light flat
headed windows with cusped lobed lights in deeply recessed
surrounds. Magnificent chancel to east is almost the size of
the nave and has three tall pointed 3-light windows with flowing
tracery to north side, each with finely carved head labelstops
and delicately moulded surrounds. Between the windows and to
the east end are stepped gableted buttresses, topped with
elaborately crocketed pinnacles, also with cusped blind
panelling to the upper parts. Above in the frieze there are two
sadly mutilated gargoyles. East end has similar buttresses to
either side of a 6-light window with central major mullion, a
combination of intersecting and flowing tracery and delicately
carved labelstops to hoodmould. Above, each corner of the
chancel has a crocketed pinnacle similar to those on the
buttresses. South elevation of chancel is similar to that to
north except window tracery is more stylised and there is a
small contemporary pointed doorcase below the western window.
This has thin nookshafts with carved capitals and carved heads
to hoodmould. South nave elevation has a pointed 4-light C13
intersecting tracery window with elongated quatrefoils to top
and carved labelstops to hoodmould, to east and a similar C12
window to that on north to centre. Beyond to west is the 1855
neo-Norman porch with semi-circular headed doorcase, of similar
design to windows, ie: with inner roll mould, nook shafts and
outer billet mould. Sides of the porch have small roll moulded
windows and plain corbel table. Above is the C15 clerestory
with three similar windows to those on north side. Inner
doorcase is late C12 and has a double roll moulded arch with
three nook shafts to sides with a mixture of scalloped and
volute capitals. Interior has no arcades but a fine late C12
chancel arch with moulded hood, and double roll moulded arch on
nook shafts with scalloped and volute capitals, also with
elaborately carved impost band. Southern capital has strange
figure of a man carved on it with volutes used as his eyes.
Above the arch is a single triangular headed opening. West end
of nave has a low double chamfered tower arch over which has
been erected a c1980 organ gallery. Both C12 nave windows have
internal roll moulded arches and nook shafts with scalloped
capitals. Chancel windows are moulded internally with
continuous sill bands and hoodmoulds with carved head stops.
The southern door is also similarly decorated. Roofs are all
C19, that to nave very plain but chancel roof is a pointed,
timber barrel vault with frieze of pierced quatrefoils to base.
The Cll roof corbels still visible in the nave below the
clerestory. To south side of chancel is a triple sedilla with
attached piscina of similar date to rest of chancel. The three
seats and the bowl each have a steeply pitched crocketed gabled
over, with crocketed pinnacles between the ogee rib vaults
below. The front of each gable has blind tracery, and each is
topped by an ornate foliage finial. Choir stalls, pulpit and
nave stalls all of oak and early C20. Font is C14 and has
moulded octagonal base and waisted stem with octagonal bowl over
carved with foliage designs and with crenellations to top. Font
cover is C20. To north side of chancel is an alms cupboard with
sculptured brass door. Reredos is c1947 of painted oak with
carved figures. In the chancel there are also several memorials
including one C13 gravestone with a raised cross on and four
stone slabs to members of the Charlton family of c1631, 1644,
1687 and 1681, the latter with a brass plaque with incised
achievement on. There is also slate war memorial and two slate
and white marble wall memorials, one of c1817 to Benjamin
Harrington and one of c1853 to the Foxcroft family. Below the
chancel arch is an alabaster slab memorial laid by Wilughby
Manley to all his children. To north side of pulpit is a small
brass plaque in a scroll topped niche, to Joseph Chadbourne who
died 1722, and above is another slate and marble early C19 wall
memorial. To west end of nave is an enamelled brass plaque
commemorating the donation of the bells in 1881. East window of
chancel has stained glass of c1885 and west tower window has
glass of similar date. Both C12 windows in nave also have
stained glass that to south of c1936 and that to north of 1956
by M Farrar Bell.