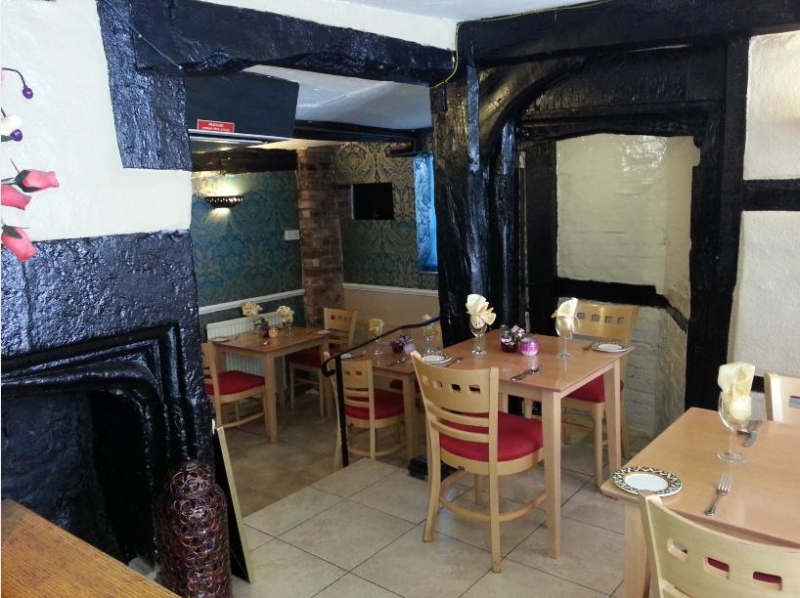 Restaurant, former house in row. Late C15 or C16 with C18
front. Painted brick, timber frame, tile roof, brick stack.
PLAN: a long narrow block with steep-pitched roof, probably
built at the same time as No.30 (qv), adjoining, with which it
interlocks at the back; large central stack at rear eaves.
EXTERIOR: 2 storeys and attic, 2-windowed. C18 two-light
gabled dormer above 2 deep-set 12-pane sashes to stone cills,
and a C19 pilaster shop front, with a 4-panel part-glazed door
to left. On the return gable to left, exposed by the
setting-back of the late C20 police station, is a small attic
window, set into the exposed framing, which appears to belong
to the demolished building rather than to No.29. A large
square brick stack rises from the rear eaves position.
INTERIOR: much of the principal framing survives. The main
front space has very heavy square panel work with a very large
transverse beam at the centre, with 150mm chamfer, carried on
an extremely deep plate beam in wall.
Back right, in slight offset from the forward space, opening
with remains of reset C15 doorway with spandrel carving, and a
superimposed ogee-bracket, and large corner post. Fireplace,
partly concealed by later fittings, has fine 4-centred stone
moulded surround to stops with spandrels. Lower back room also
has large chamfered transverse beams and framed rear wall.
In room above, now (1992) the kitchen, the heavy framing is
cross-braced. The first-floor front room has fine framed party
walls, small transverse beam, and C19 fireplace. Original
clasped-purlin roof replaced in C18; C15 queen-post truss to
right, C16 two-bay clasped purlin collar-truss roof to rear.
This structure, concealed behind an unprepossessing later
facade, is characteristic of the small-scale early framed
buildings in the town.
The evidence for doorways on the right gable walls at ground-
and first-floor levels suggests that the original medieval
house was larger and probably included a now demolished hall
to the right.