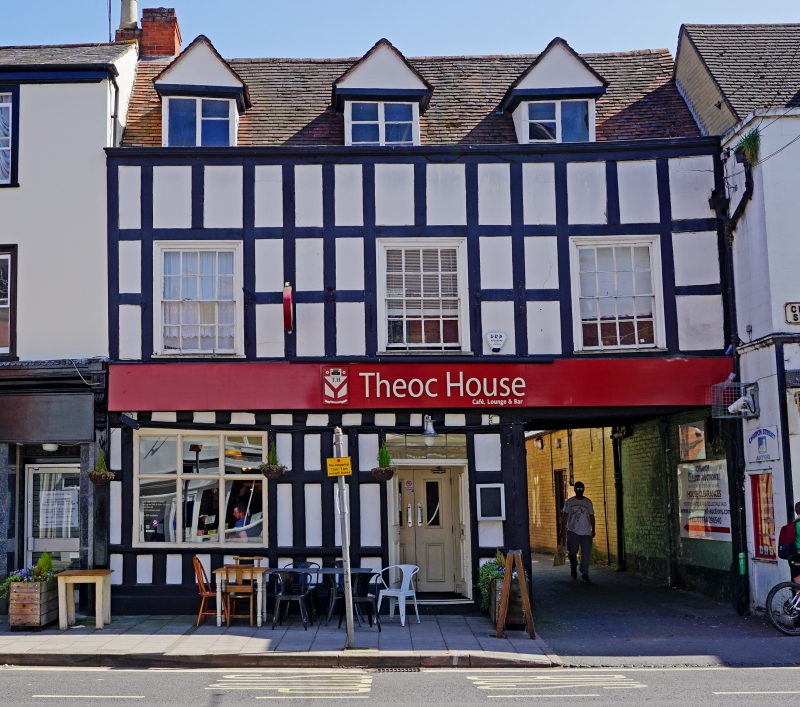 Inn. Late C16 or early C17, large late C19 extension, modified
early C19 and late C20 street front. Timber-framing,
square-panelled to first floor and close-studded to ground
floor, plaster panels, brick extensions, tile roofs, brick
stacks.
PLAN: parallel front spans a wide carriageway to the right,
and is linked to the late Victorian block with a narrow wing
which also has a small internal courtyard adjoining No.83
(qv); ground floor has been opened up, with loss of any early
features.
EXTERIOR: 2 storeys, attic and basement, 3-windowed. Three
2-light gabled C18 dormers above 16-pane sashes in moulded
architraves. Underbuilt ground floor in mock framing, with a
3-light early C20 casement with transom, and decorative
leading with coloured glass, to left, and pair of part-glazed
doors of the same period to right. Rear of main block in
square panel framing, with a 4-pane sash over the carriageway.
This connects by a shallow wing to the red brick extensions,
in which the first part has, at ground floor, a wide 7-light
casement with decorative leading and coloured Art Nouveau
glass, all under a wide segmental brick arch. A similar
6-light window and glazing has been inserted in opposite wall
of this part of the extension; this wall, enclosing small
yard, in heavy C16 or C17 square-panel framing; at first floor
a 2-light casement has been continued to a dormer window.
Beyond this narrow link the remainder is roughly detailed red
brickwork with stone dressings, but including a doorway with
ornate surround and stone pediment.
INTERIOR was in process of alteration at the time of survey,
with all new fittings to ground floor. Some framing exposed in
upper floor. Basement includes some rubble stone walling,
including the transverse rear wall, now faced with concrete
block. 2 chamfered beams, one of these propped on a haunched
post. Early (late C16 or C17) cellar extended in long unit in
brick in various compartments, including arched bins.