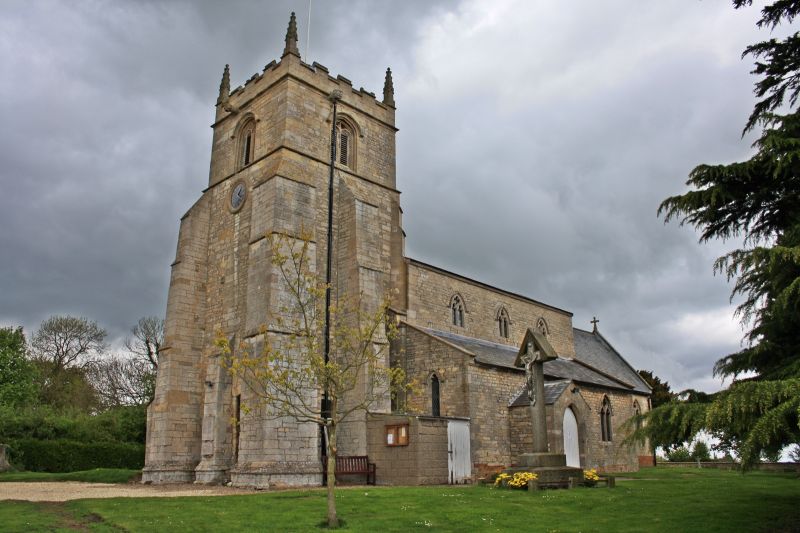 Parish Church. C12, C13, C14, nave rebuilt 1792, chancel rebuilt 1838, restored
1887 by Goddards of Lincoln. Coursed limestone rubble with ashlar and red brick
dressings. Slate roofs with ashlar coped gables. Flush ashlar quoins. West tower,
nave with aisles and clerestory, south porch, north west vestry and north east organ
chamber, and chancel. West tower of 3 stages, with very massive irregularly placed
buttresses with set-offs. West face has short off-centre buttress with 2 memorial
tablets to the First and Second World Wars. To the right a plank door, reached
up 4 steps, with a glazing bar overlight and a segment head with keystone. Above
a C19 clock in moulded surround, then a band. All four faces of the third stage
are the same with 2-light bell openings with Y-tracery in shallow point arches with
double chamfered surrounds, hoodmoulds and label stops. Topped by a band with a
gargoyle, and battlements with corner pinnacles. The south face has a C20 breeze-
block lean-to, boiler house, and a full height central buttress with a small fixed,
leaded light to the left. The north face is blank, with a C19 lean-to vestry below,
with a single 2-light chamfered mullion window. North aisle has a blocked pointed
arched doorway to the right, then 2 pointed arched windows in chamfered surrounds
to the left, the first with flowing tracery and the second with reticulated tracery.
The clerestory has 3 similar windows on the north and south, each 2-light, with
flowing tracery in shallow arched chamfered surrounds. The organ chamber east wall
has a single pointed, chamfered lancet. The 1838 chancel has a brick plinth, and
the gable is topped by a cross finial. The 3-light east window, in a pointed,
chamfered surround has cusped tracery. The chancel south wall has a pointed doorway
with C19 studded door, and an unusual stone fanlight, with rows of round and pointed
arches, flanked by head stops. Above a plaque inscribed 'T CLIFTON 1838'. To
either side are single pointed, 2-light windows with geometric tracery. The south
aisle has 2 pointed windows in chamfered surrounds, the left with flowing, the right
with reticulated tracery. The gabled south porch has a pointed doorway with a
chamfered surround and a plank door. The inner doorway is similar with a C20 door.
Interior: 2 bay nave arcades with wide, pointed, double chamfered arches with a
south quatrefoil pier and a square north pier with demi-shafts, plus single shaft
responds all with moulded bases and plain capitals. Tower arch has a wide, round,
chamfered outer arch, and a crude, pointed, double chamfered inner arch, with shafts
with moulded bases and plain capitals. Chancel arch has a double chamfered pointed
arch with three quarter shaft responds. Nave has flat C18 plaster ceiling with
2 elliptical palmette rosettes and a moulded cornice. Chancel has a C19 wooden
roof, and heavily restored C11 pillar piscina, with a 4 cluster shaft and scallop
capitals. Ornate C19 octagonal stone font. Early C20 wooden screen, pulpit reredos
and altar. C19 choir stalls. 5 Slate wall tablets to the Clifton family in the
chancel, and a wooden carved wall tablet of 1908 by C G Wheat, in the south aisle.