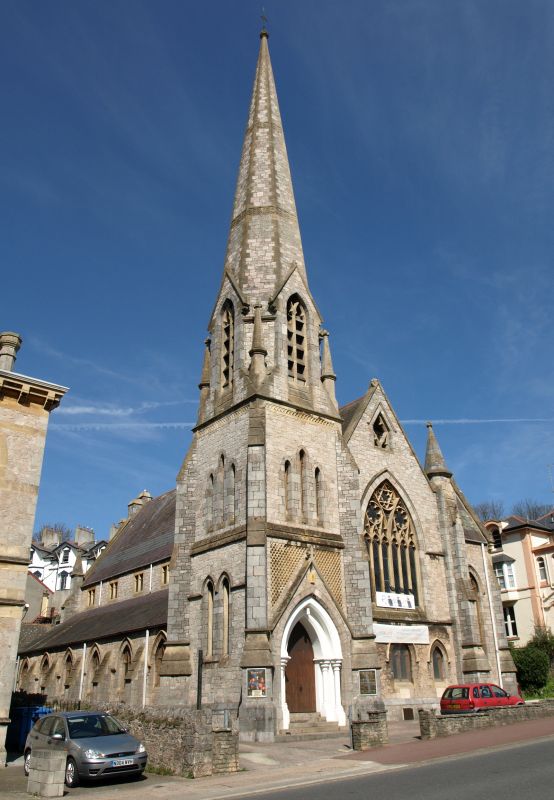 Non-conformist chapel. 3 foundation stones dated March 17,
1873 under lower windows in the front gable wall. For Wesleyan
Methodist Church, in a late C13 Gothic revival style. Squared
rubble with ashlar dressings and details, slate roofs with
decorative tiled ridges, coped gables with finials, weathered
offset plinths.
A 2-stage tower surmounted by a broached octagonal belfrey
stage, with octagonal pinnacles set on the broaches, carries a
tall octagonal ashlar spire. Tower partly projects to left of
the gabled front of a wide 6-bay nave with chancel on one bay.
Side aisles to nave below clerestory.
A timber gallery across first bay of nave above a screened
lobby, entered from porch in lower stage of tower at the end
of the left-hand aisle and from a tall cross gabled porch at
the end of the right-hand aisle.
Front: Tower has diagonal buttresses with weathered offsets,
an arched doorway to porch in lower stage above a flight of
steps: 2 inset arched orders carried on detached nook shafts
with moulded caps and moulded bases. Gablet with finial over
doorway arch with diapered spandrels above. A pair of lancets
to side of tower in lower stage and a triplet of graduated
lancets in each exposed face of second stage. A 2-light
lucarne with Y tracery to each of the major faces of the
belfrey stage under gablets set against the base of the spire.
Spire has quoined angles and 2 bands in contrasting darker
stone.
In gable end wall, a low stage with a central arched window of
2 lights with Y tracery and a single-light arched window to
either side. Upper stage has a large 6-light arched window
with goemetrical tracery and foiled lights under a hood mould.
A roof light in apex of gable with triangular head inset with
foiled diamond tracery panel. To right of gable, a turret with
octagonal spirelet and offset weathered buttress to front.
Side of porch to right has a tall 2-light arched window with Y
tracery.
Doorway to cross-gabled porch is similar to porch doorway in
tower but with only one order to inset arch with nook shafts.
An arched 2-light window with Y tracery above.
Side elevations: an arched 2-light window in each aisle bay
and flat arched two light clerestory windows above.
INTERIOR: nave arcades have octagonal cast-iron columns with
moulded caps carrying moulded arches under a continuous
running hood mould. Chancel arch of two orders: white marble
jambs with figured black marble nook shafts to the outer order
of the arch, inner order supported by short central shafts
carried on stiff leaf marble corbels. Timber roof trusses
partly exposed with arched and diagonal braces to collars and
principle rafters. Feet of arched braces to each truss
supported on corbelled shafts with stiff leaf capitals.
Stiff-leaf corbels set in the springings of the arcade.
Boarded ceiling at level of collars and to common rafters. A
tall panelled dado in chancel. Central 3 bays with Gothic
style reredos with traceried panels and cornice. Timber dado
to aisles with decorative capping, plastered walls above. A
3-light window above reredos in chancel with geometrical
tracery, stained glass in the lights. Stands close to Torquay
Museum (qv).