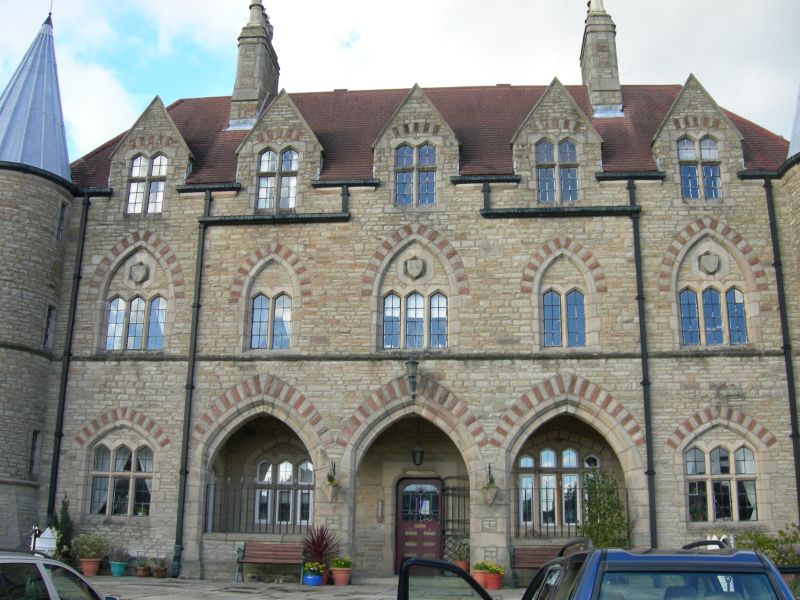 Keep and headquarters of militia barracks, now subdivided as flats. 1855-65, converted 1980s. Roughly coursed and squared sandstone rubble with axial and corbelled exterior stacks and plain tiled hipped roof. Picturesque Tudorbethan Revival style. Double-depth plan.
EXTERIOR: 2 storeys and attic; 5-window range. Round stair towers stand out from each corner, with battered plinths and conical roofs, the roof lost to the rear left, and narrow stepped loop lights. Main range has 3 bays of pointed-arched arcading to ground floor, with central entrance and flanking foiled mullioned and transomed windows recessed. Similar windows in outer bays beneath pointed polychrome relieving arches. Upper 2- and 3-light mullioned and transomed windows with banded relieving arches. Similar windows as dormers above.
Returns have corbelled exterior stacks heating the attic, with flat-topped half dormers either side. Metal-framed casement windows.
INTERIOR: not inspected.
HISTORY: probably formed the headquarters building and the keep, or secure armoury , for the regiment. Erected following the Militia Act (1852) to provide a secure store for equipment, an armoury , NCO's barracks and drilling space- Many local militia used the barracks as an emblematic focus for the regiment. Macclesfield is not only one of the largest, but also one of the most picturesque of the militia barracks, being a richly-detailed composition of considerable architectural invention, of which the former keep was the centrepiece.