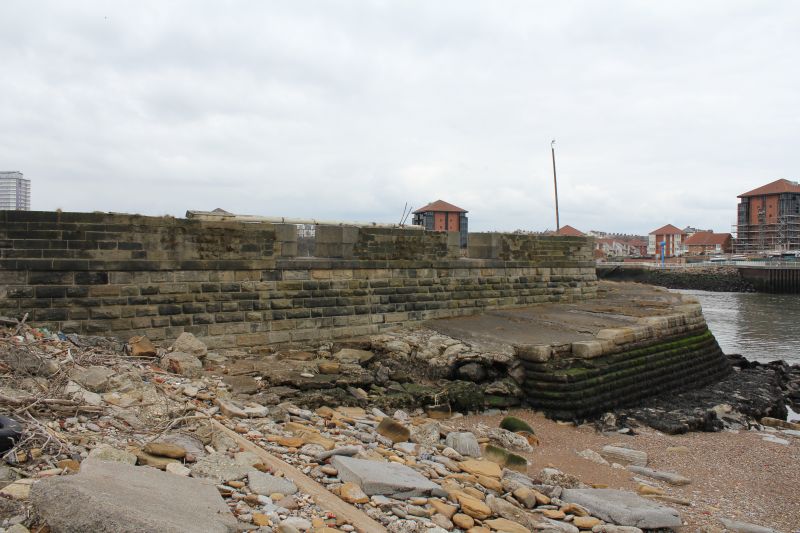 Battery. c1873. For the War Office on site given in 1860 by
River Wear Commission. Ashlar. A mole projecting into the
river inside the harbour, on the E side of the Wave Basin and
immediately SW of old South Pier, with 4 gun emplacements.
No.1 gun emplacement at the N, rounded end of the mole has had
concrete filling added. The second and third emplacements have
splayed openings to seaward in the battery wall, which is
protected from the water by the breakwater of the mole. Nos 1
and 4 gun emplacements had an ashlar circle and a central
ashlar block in which the central pivot was set; at least one
pivot survives; these guns fired over over the parapet. Nos 2
and 3 had front pivot traversing carriages of either wood or
wrought-iron. The original artillery consisted of four 80
pounder rifle muzzle loading guns. This is the one surviving
example of an RML battery between the Humber and the Tweed. It
is an important illustration of the transition from cannon to
modern artillery, and also illustrates the methods used to
defend mercantile ports in the years after the Crimean War and
the production of iron-clad warships. It is shown on an 1875
official plan of Hudson Docks, reproduced in Sinclair 1986.
(Fortress Study Group: Conference notes: Tyneside: 1988-;
Sinclair NT: Railways of Sunderland: Newcastle upon Tyne:
1986-: 60).