Church of St Lawrence the Martyr 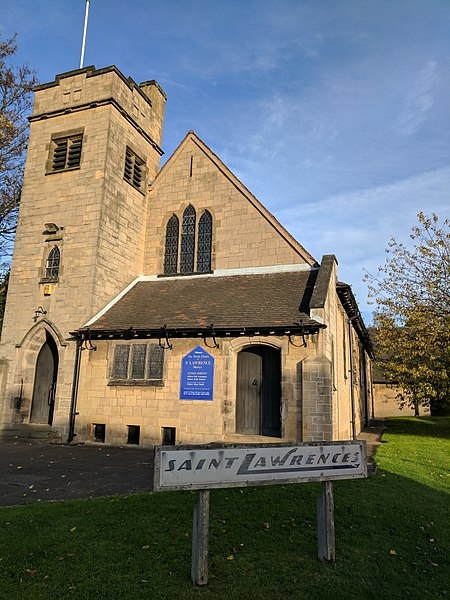 Parish church. Dated 1909. Random squared stone with ashlar
dressings and plain tile roofs with gutters on brackets. Free
Gothic style. Nave and chancel, transepts, west porch, south
west tower.
Chancel has blank sides, and plain graduated triple lancet to
east. North transept has 2 single lancets to north, with
hoodmoulds, and to west, a blocked arch. South transept has a
4-light flat-headed mullioned window with label mould, and a
single smaller window to right.
Nave has on either side 2 single lancets flanked by single
segmental pointed-arch 3-light windows and beyond, single
lancets. South side has, to east, a pointed arched door with
flat-headed surround. West end has a graduated triple lancet.
Below it, a lean-to porch with a coped gable. Moulded
segment-arched double door with to left a 3-light mullioned
window with 3 square openings below it. Right return has a
single lancet.
Square south-west tower, 3 stages, has chamfered north-east
corner, impost band, parapet with moulded stepped coping, and
corner stack. Pointed-arched double door with hoodmould, and
above, a single lancet with label mould. Bell stage has a
flat-headed louvred double opening on each side. Parapet has
recessed panel with cross, on each side.
INTERIOR: nave has principal rafter roof with tie beams, and
strutted kingposts under the purlins. Round-arched plaster
ceiling above the purlin. Narrower chancel has similar round
arch with wooden ribs. Nave has painted brick walls. North
side has stained glass window, 1952. South side has pointed
doorway to east. At west end, triple lancet above and below,
central round-arched opening to baptistry, with inscribed
moulded war memorial panels on either side and a stained-glass
memorial window and brasses, 1949. Beyond, on either side,
segment-headed double doors.
Chancel opening has plain ashlar piers, the south one with a
pointed arched doorway. East end has stained-glass window,
c1909. North side has recess containing organ. South side has
chamfered pointed double aumbry and piscina. To west, a recess
with wooden lintel and pointed arched door to vestry in
transept.
FITTINGS include octagonal eggcup font with moulded top, dated
1662. Panelled wooden pulpit, altar rail, stalls and desks
with shaped ends, wooden eagle lectern and chairs, early and
mid C20.