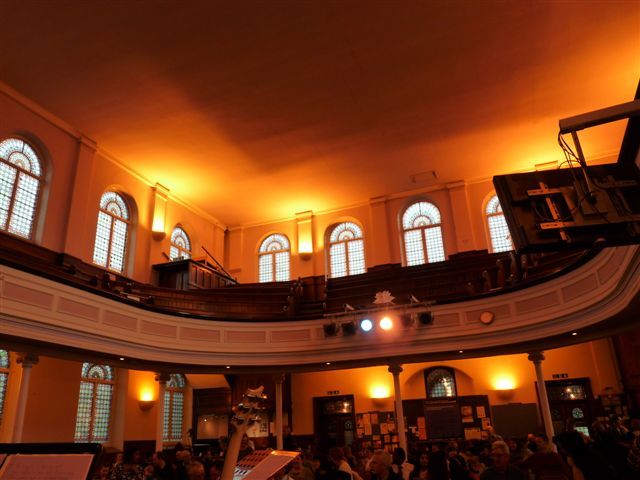 Formerly known as: Wesley Chapel NORTH ROAD.
Wesleyan Methodist chapel with schoolroom under, now
Pentecostal Church with meeting rooms. 1838, altered, with
additions, in 1885-6. Red brick in Flemish bond (sides and
rear of brown brick in English garden wall bond), with
sandstone dressings and slate roof. Rectangular plan on
east-west axis, with porch added to east front and short
addition to rear. Two storeys over basement, 5 bays,
symmetrical, with a 3-bay pedimented centre breaking forwards
slightly, panelled corner pilasters with corniced caps, 1st
floor sillband, plain frieze and moulded cornice. At ground
floor the facade is covered by the 1885 porch, which is
rectangular in plan and wider than the main building, one
storey and 5 bays, symmetrical, with a stone plinth, a central
doorway with Tuscan columns tetrastyle in antis, doorways in
the outer bays framed by pilasters with stylised acanthus
enrichment to the capitals, a continuous frieze and cornice
with an upstand over the centre and balustrades of open
roundels over the outer bays; all the doorways are approached
by steps, are round-headed, with fanlights, and have moulded
architraves with carved foliated spandrels (that in the centre
with a keystone); the intermediate bays have narrow
round-headed windows with similar architraves; the returned
ends have matching but larger windows. The 1st floor has 5
round-headed windows with sill- and impost-bands, moulded
surrounds to the heads (that in the centre stilted), and
leaded honeycomb glazing (of 1885); and above those in the
centre a string course, a band of carved square panels, and a
pediment (coping damaged) containing a rectangular stone
plaque lettered "A.D. 1838" (former lettering above erased).
The 5-bay north and south side walls each have bands at
ground- and 1st floors, rectangular basement windows (glazing
altered and doorway now in 4th bay of north side), and
round-headed windows on both upper floors with glazing like
those at the front. Rear has corner pilasters, and pedimented
gable with chimney, but is mostly covered by addition.
INTERIOR: horseshoe gallery with panelled front, carried on
slender cast-iron columns with Ionic capitals; at west end, a
semi-elliptical-headed giant arch which has fluted pilasters
with decorated moulded caps, and former orchestra gallery now
with organ; pitch-pine pews and ornamental rostrum all of
1885.