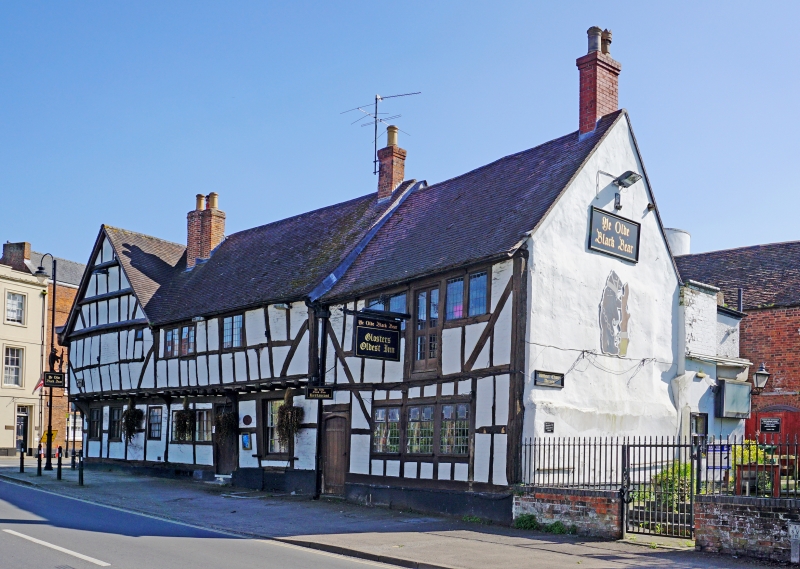 Inn. Early C16. Timber-framing, painted brickwork or plaster
panels; square-panelled with tension bracing to first floor
and close-studded to ground floor, tile roof, brick stacks.
PLAN: a short frontage to High Street, with a throughway to
the left, and a longer return, in 2 parts, to Mythe Road.
L-plan, with central chimney breast backed by the staircase in
the internal angle, and corridor along the back to
single-depth rooms; the slightly lower end section, to the
west, in large full-depth rooms, may have been a service unit,
with loading doors, modified in the C17 as an extension to the
main premises.
EXTERIOR: High Street front is in 2 storeys, with replacement
framing. A formerly jettied first floor in braced box framing
is above a close-studded ground floor. The windows are all
replacement casements with wood mullions and leading,
5+5-lights at first floor, and 3+4-light with transom to the
ground floor. To the left is an early plank door on strap
hinges, and on a sandstone step giving to the throughway. A
deep eaves conceals the guttering. The left return gable is
plain, rendered, with an external brick stack.
The longer frontage has a jettied section with a broad gable
to the left in braced framing. In 2 storeys, with a basement
and former attic, this has a blocked opening in the gable and
in the first floor below it. In the jettied section are two
2-light casements, paired to a stud member, and a further
2-light with a blocked opening beyond.
In the ground floor are two 2-light casements with transom,
near the corner, a small 12-pane sash, a 3+2-light casement
with horizontal bars, and a large 16-pane sash. To the left of
this sash is an early plank door. The jetty joists are
exposed, and there is a carved corner post with brattished top
carrying a dragon beam. At the rear eaves of the front block
is a large brick stack, and a small stack to the gable at the
junction with the lower unit. There is a rendered plinth to
the whole.
The end unit, in 2 storeys, has at first floor a central pair
of part-glazed doors flanked by 2-light casements. The ground
floor has three 2-light casements with transom. To the left is
a plank door under replacement peaked head. The return gable,
with stack, is plain. The back has various additions.
INTERIOR: the main front bar has an early C17 plastered
ceiling with 3 rosettes, a dolphin, and a rosette in
geometrical surround, also a plastered dragon-beam with a
soffit of leaf and rosette. A central chamfered beam is
unplastered. This room was heated, but the fireplace is now
blocked.
Behind the bar is a fine 2-plank door giving to the
throughway. A winder stair backs the chimney breast; along the
corridor, right, is a cellar access door under an iron-grilled
transom-light. The cellar stairs are the normal 'Tewkesbury'
type of brick with timber facing, and the cellar ceiling has
been rebuilt. 2 middle rooms have chamfered transverse beams.
The end room is at a lower level than the remainder. It has a
very large chamfered transverse beam on curved brackets, heavy
box framing, with very high plinth in the rear wall, and a C17
carved overmantel and surround to a stone fireplace with
4-centred arch on moulded and stopped jambs. The kitchen has a
very broad chamfered beam.
A recent straight-flight stair rises to the 2-bay room above
the end section with a plain stone surround to the fire, a
central queen-post truss and wind-bracing to each slope; the
space is ceiled above collar height.
The High Street front has 2 rooms, that to the right is
larger, with 2 heavy chamfered spine beams, one of these very
close to the back wall, and a blocked fireplace with chamfered
and shaped wood bressumer on stone jambs. To the left of the
stair is a lobby with exposed joists, and a former doorway
with peaked head to the stair. Various heavy chamfered beams,
and in the upper corridor one large jowelled post without tie
or other head member.
The inn is said to have been in existence by 1308, but
probably existed before this, as it holds a vital position
adjacent to King John's Bridge (qv). Most of the existing
fabric seems to be original, with restoration work
particularly to the High Street front. Internally floors have
been replaced to the ground floor in part. The Black Bear is
derived from the Beauchamp crest.