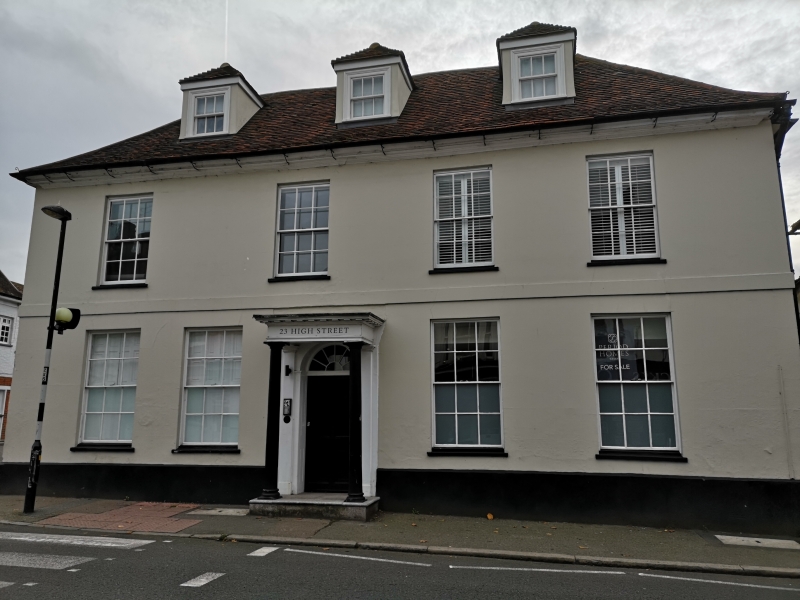 INGATESTONE AND FRYERNING
TQ6599
723-1/14/375
10/04/67 HIGH STREET,Ingatestone (South East side)
No.23 and 20
(formerly Listed as:
BRENTWOOD
HIGH STREET, Ingatestone
(South East Side)
Nos.23
Corner House )
II
Formerly known as: No.98 Corner House Private Hotel HIGH STREET.
House, now offices. C17, altered and extended in C18 and early C19. Timber-framed, plastered, roofed with handmade red clay tiles. Complex plan
comprising (1) main range facing NW, with stacks at left end and at rear
right, (2) 3 adjacent rear wings, the right wing enclosing the rear stack,
the middle wing having a C19 external stack at the end, (3) an early C19
lean-to extension to the rear of the 2 right wings, slightly overlapping
the third (4) an C18 service range extending obliquely to rear left,
following the line of Stock Lane, enclosing the side stack of the main
range, with an axial stack at the end, (5) an early C19 single-storey
extension beyond, with an external stack at the end, (6) minor lean-to
single-storey extensions at the junction of the main range and service
range. 2 storeys. The house has been extensively re-styled c1800, and
most of the external features and some internal features are of that period, although an earlier hardwood frame, fully jointed and pegged, is visible in places. Ground floor, 4 sashes of 6+6 lights, c1800. First floor, 4 similar sashes, of which 3 line up with those below, and one has been moved to accommodate internal alterations. Central moulded 6-panel door, fanlight
with radial tracery, in Tuscan portico with 2 - wooden columns, moulded and dentilled cornice, panelled jambs and soffit, tiled step. Plaster band at
first-floor level, extending along both returns. Hipped roof with moulded
eaves cornice and wrought-iron gutter brackets. The right return has
plaster corner pilasters and one in the middle, covering the timber frame,
and one sash of 6+6 lights on each floor, c1800. The left return has one
corner pilaster and a plain parapet with plaster band; beyond it the
service range has wrought-iron gutter brackets; no door or window apertures.
The left stack is plastered. The rear elevation has on the ground floor one
early C19 sash of 4+8 lights and one C20 replica, and on the first floor
one sash of 4+8 lights, one large sash of 6+6 lights (lighting the stair),
one sash of 3+6 lights, all early C19, and one of 6+6 lights, early/mid-C18.
The 3 rear wings have hipped roofs; wrought iron gutter brackets on the
left rear wing. The service range and extension beyond have some
weatherboarding and are roofed with machine-made red tiles. It has on the
first floor one early C19 window of 2 casements of 3 lights each and 3
fixed lights, and wrought-iron gutter brackets; the extension beyond has
a C19 fixed light of 6 panes. Many of the windows retain handmade glass,
and together comprise an exceptional collection, meriting special care.
INTERIOR: the ground-floor windows at the front all have
moulded panelled folding shutters in the splays and panels
below. The central entrance hall has on each side a moulded
6-panel door with fluted doorcase and carved rosettes at the
top corners, c1800, and a similar doorcase inside the front
door; moulded wooden pilasters and a moulded semicircular
arch, c1800; and at the far end, a pair of early/mid-C18
glazed doors with ovolo-moulded glazing bars, each with 8
panes of wired glass and a fielded panel below. Early C18
stair of 4 straight flights to rear right, with moulded pine
handrail and closed string, and turned balusters (?partly
beech). The ground-floor room at front right has early C19
moulded plaster ceiling covings, and similar moulded plaster
on the transverse beam; it is divided into 2 smaller offices,
without affecting these features. The left room has a boxed
transverse beam. The rooms above have respectively a beaded
transverse beam and a chamfered transverse beam; the left room
has a blocked C18 fireplace with a moulded mantel shelf. The
rear right wing has above the ground floor a chamfered
transverse beam with lamb's tongue stops, and some original
hardwood framing is exposed in the rear left wing. The service
wing to rear left retains early internal features, including a
C17 3-plank door to a cupboard; an C18 wide boarded and ledged
door at the foot of the service stair, faced with hardboard,
and another to the rear extension; and an early/mid-C18
borrowed light with ovolo-moulded glazing bars and 6 panes of
handmade glass. These internal features also comprise an
exceptional colection meriting special care.
HISTORICAL NOTE: a building on this site, probably
incorporated in the present structure, is documented as
Setters or Levers from 1574, and as an inn, The Cross Keys
from 1601-1731. In 1823 and 1851 it was occupied by Cornelius
Butler, surgeon. It became a private hotel in the C20 before
its present use as a solicitor's office from 1960.
(Kemble GVH: Survey of Ingatestone High Street: 1987-).