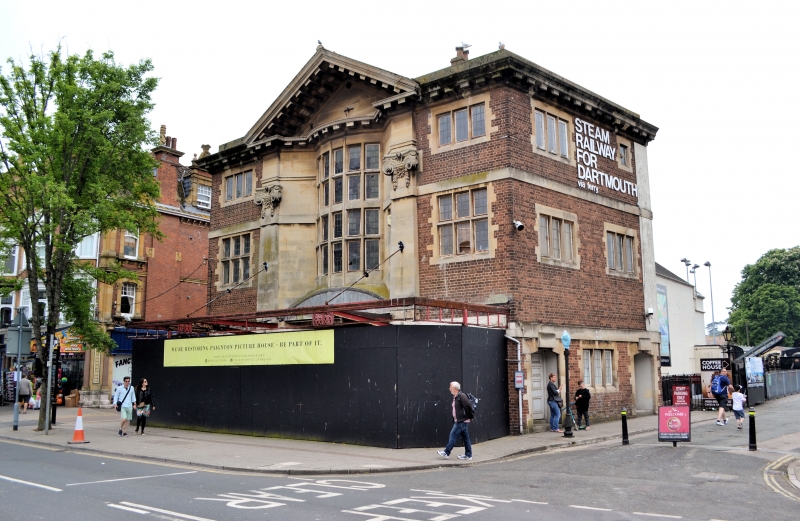 Cinema. Licensed and officially opened 1912, but actually
opened previously (Soundy-Bennett). Probably designed by Hyams
and Hodgen of Paignton (documentation); contractor Percy Drewe
of Paignton. Free Baroque style with Art Nouveau decorative
details.
MATERIALS: Flemish bond N Staffordshire brick with iron
reinforcment, freestone dressings; slate roof concealed behind
parapet.
PLAN: Facing onto Torbay Road. Deep rectangular plan with an
internal balcony.
EXTERIOR: 3-storey 3-bay front. Centre bay canted inwards with
pedimented gable projecting on very deep brackets. Bay flanked
by wide pilaster strips with Ionic capitals some distance
below eaves level; first floor bow window to foyer. Very deep
moulded stone eaves cornice on modillion brackets with parapet
above to outer bays. Platband above second floor windows of
outer bays linked to central transom of bowed foyer window.
Spectacular Art Nouveau doorway to lower foyer. Round-headed
varnished timber architrave with triple egg moulding. Transom
with 4-light fanlight above, made up of panes of bevelled
glass.
2-leaf doors, glazed with bevelled panes, the outer bottom
corners of each leaf infilled with varnished timber spandrels
giving an overall oval shape to the entrance. Fine sinuous
timber door handles fixed to copper plate. Doorway has steps
up, divided by probably original brass and timber hand-rail,
upper step mosaic Deep canopy across front and over doorway
(not part of the original design) is supported on 2 slender
reeded cast-iron columns.
First-floor stone-mullioned and transomed 5-light foyer window
above with 3 transoms, glazed with Art Nouveau stained glass.
3-light stone mullioned windows to outer bays, the first floor
windows transomed. Windows in the same style to one bay of the
returns.
INTERIOR: The foyer on the ground floor has been somewhat
altered but the original stairs to the upper foyer are intact
with plain, closely-spaced varnished splat balusters with Art
Nouveau motifs. Stained glass decorates the window of the
upper foyer.
In the auditorium the proscenium arch and the orchestra pit of
a 21-piece orchestra have been altered; otherwise the interior
is remarkably well-preserved. The auditorium has a 6-bay
barrel ceiling with ribs supported on corbels which are
decorated with heads in relief of Mary Pickford and Douglas
Fairbanks Junior, the latter in the headgear of Moses - heads
said to have been added to the original design.
Ceiling decorated with mouldings of fruit and foliage.
Original Art Deco-style wall lights made at a local smith's
shop (Mann). The pastel colours of the wall and ceiling
decoration are said to have been unchanged since the cinema
opened.
Grilles on long walls from the original and unusually early
air-conditioning system which filtered air through a plenum
plant. System (except coal-fired boiler) said to be intact.
Curved balcony frontal, recessed in the centre with original
decoration. Private boxes at the rear of the balcony are still
in use.
Tip-up seats, reduced in number and re-arranged for smaller
audiences, are said to be original but re-upholstered. Roof
said to be iron A-frame trusses.
HISTORY: A hotel on the site was demolished to make way for
the cinema. The precise date at which it opened is unclear, in
spite of a remarkable archive of documentation in the hands of
the present owners. A request for a licence is said to have
been made to the Local Authority as early as 1907 (Mann). The
Paignton Picture House Co. (whose directors included Farrance
Gillie), who ran the cinema (previously known as the Paignton
Electric Picture Palace) and a film library, renting out film
to other organisations, was incorporated on 15 April 1913.
Agatha Christie was a regular user when she was living in
Dartmouth (Mann) and the cinema is said to be the model for
the 'Gaiety' cinema in her fiction. Paris Singer, who
remodelled Oldway Mansion (qv) is said to have visited with
Isadora Duncan: documentation shows that Singer sold the
cinema company a grand piano.
Atwell's book lists (without claiming to be comprehensive) 8
cinemas purpose-built before 1912 as being still in use, with
7 others converted to other uses. The earliest is the
Electric, Portabello Road, 1907.
An extremely well-preserved example of an early purpose-built
cinema with an important archive of documentation.
(Dissertation for College of St Mark and St John, Plymouth:
Soundy-Bennett P: The Torbay Cinema, Paignton: 1990-; Atwell
D: Cathedrals of the Movies: 1987-; Documentation and oral
history provided by Mr John Mann, manager).