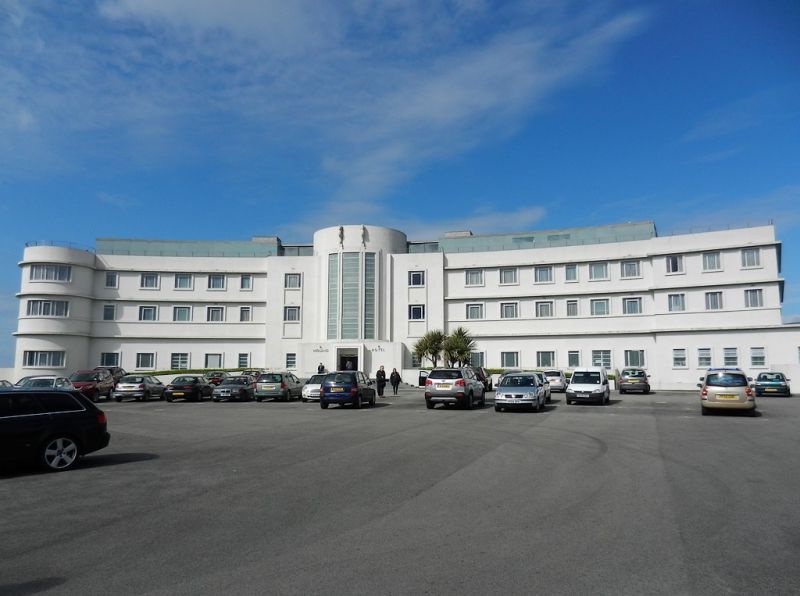 Hotel. 1932-3 by Oliver Hill.
Concrete and rendered brickwork, painted white.
Curved plan, with convex side facing west towards the sea.
3 storeys. Windows are steel-framed casements with rendered
surrounds. Above each storey are projecting horizontal bands.
The entrance front has a rounded left-hand (south) corner, and
a convex central staircase projection rising above roof level.
This projection has a tall window of steel casements above the
doorway, divided into 3 by mullions, both of which are capped
by sea horses, painted red, which were carved by Eric Gill.
Projecting at the right is a single-storey cafe of circular
plan, now known as the Ravilious Restaurant. The west side has
a single-storey projecting sun lounge, which is an addition,
its windows replaced in PVC-coated steel. Between the solid
centre and ends of the facade the 1st and 2nd floors have
their walls recessed to form balconies.
Interior: above the cantilevered circular open-well staircase
is a ceiling panel carved in low relief by Eric Gill and
painted by Denis Tegetmeier. They were also responsible for
the pictorial map of north-west England in what was originally
the children's room at the south end of the building.
Also in this room is Eric Gill's Portland stone panel,
originally in the lounge, carved in low relief with a
representation of Odysseus and Nausicaa. It was moved to its
present position when internal walls were demolished during
the 1970s. The cafe walls were originally painted with
frescoes by Eric Ravilious, representing morning and evening
in an idyllic seascape setting. These deteriorated rapidly
because the plaster and paint used were incompatible and were
obliterated within 2 years of completion, but were repainted
in the late 1980s using photographic evidence.
(Stansfield Colin: Beside the Seaside: 1986-).