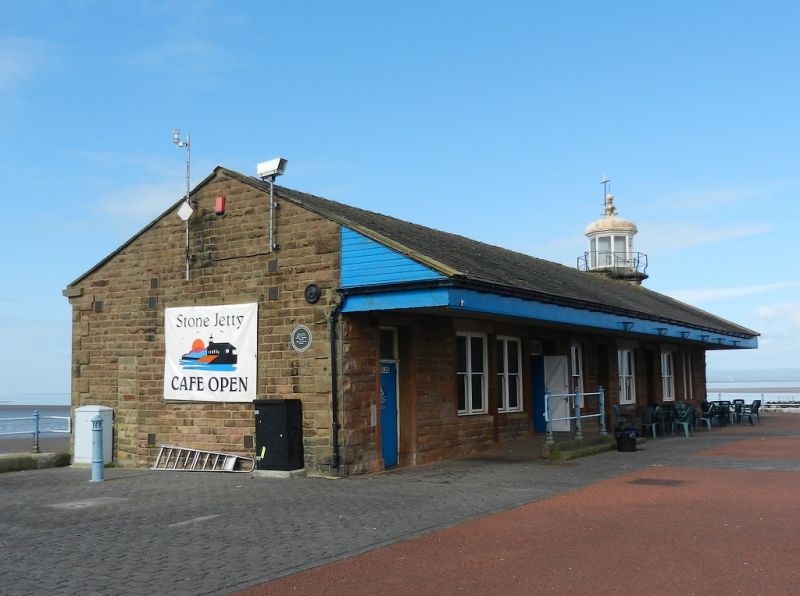 Former station and lighthouse, now used for fish storage.
Station building early 1850s, with lighthouse added shortly
afterwards.
Coursed squared sandstone with slate roof.
Single-storey station. On the north-east side, facing the
jetty, the roof overhangs to form a canopy. The door and
window openings have painted stone surrounds and the windows
have external shutters. There are windows separating the 4
doors, with 2 further windows to the right and with paired
window openings between the 1st and 2nd doors.
Early photographs show the facade to be relatively unaltered,
apart from the enlargement of window openings and removal of
chimney caps. The left-hand gable wall, facing the land, has 2
window openings separated by a central mullion.
The right-hand gable wall contains 2 doorways and 2 windows,
all partly filled with masonry. The south-west wall, close to
the edge of the jetty, contains 6 windows with stone
surrounds. 2 with central mullions dividing them into 2
lights.
Adjoining the west end, and linked to it by the handrail of
the walkway, is a lighthouse with a square base broached to an
octagonal tower of rock-faced sandstone. The walkway is
treated as a moulded capital and carries iron railings. The
lantern has a white-painted ogee cap with finial.
During 1852 a goods warehouse and crane was erected on the
jetty whose construction was legalised by the North Western
Railway Act of 1852, and a steamer service was then operating
to Peel and to the north of Ireland.
(Baughan P E: The Midland Railway North of Leeds: 1987-: 293).