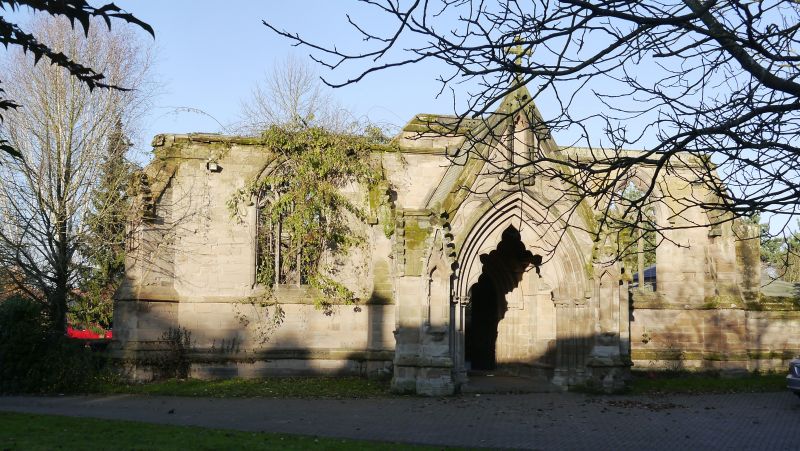 Remains of church, begun in 1881 but unfinished when
consecrated in 1910. Never subsequently completed, and
partially demolished in 1980. By George Gilbert Scott,
continued after his death by his son, John Oldrid Scott.
Sandstone facing over brick core. What survives is the
footings for the west wall, and substantial parts of the north
and south walls, including the south porch. This is steeply
gabled, with crocketted niches to either side and above the
cusped archway, with decorated spandrels in the angles. Coped
gables capped by cross as finial. Vaulted ceiling, and
Decorated inner arch with clustered shafts. Original door with
ironwork. 2 windows with Decorated style tracery survive to
either side of this, and the lower embrasures for 2 others to
the east. North door with original ironwork survives in
heavily buttressed north wall. Polygonal stair turrets to NE
and SE. Inside, the remains of shafts for aisle arcading, and
of an arch to the south chancel aisle. The church was the 3rd
to be built, replacing one of brick built in 1782, itself
apparently replacing a medieval building.
(The Buildings of England: Pevsner N: Worcestershire).