Oldham War Memorial, including memorial wall, piers, gates and steps to St Mary’s churchyard and forecourt walls, steps and balustrade (south side), and railings to St Mary's Churchyard (west side). 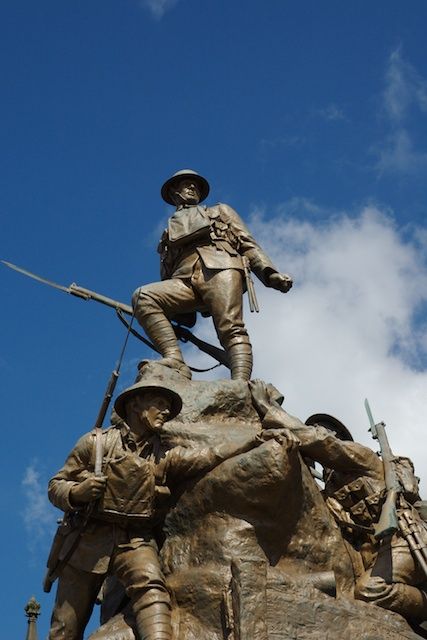 The memorial stands on a raised stone-paved area above the High Street to the south of the Church of St Mary and St Peter (rebuilt 1827-30, listed Grade II*), which stands at the town’s highest point. The memorial, the churchyard entrance and the church’s south porch are aligned on the same axis.

The freestanding memorial consists of a large rectangular granite pedestal on a shallow stepped base. The pedestal resembles a mausoleum and contains a chamber accessed by a pair of bronze coffered doors on the north side, decorated with wreaths and cartouches. A matching set of doors on the south side was replaced in 1955 by a window displaying a mechanised Roll of Honour recording the names of those local servicemen who died in the Second World War. The south side of the pedestal is inscribed DEATH IS THE GATE OF LIFE/ 1914 – 1918 and the north TO GOD BE THE PRAISE.

The pedestal is surmounted by a massive bronze sculpture of a trench scene of five infantrymen, bayonets fixed, in the process of going ‘over the top’. The activity is represented in the round: two soldiers move along the trench, two ascend the sides and the fifth stands atop the parapet. The composition is one of great dynamism, with battle dress, weaponry and equipment, through to the sandbags and timber revetments of the trench, including artillery shells on the trench floor, depicted in great detail.

The forecourt is enclosed on the south and west sides by sandstone ashlar walls, incorporating a flight of steps from the High Street pavement at the south, and a shorter flight on the west side. The walls carry a cast-iron balustrade with a Greek-key pattern frieze. The adjoining stone walls to the west, enclosing a small rectangular memorial garden, were added in the later-C20. To the west of the parish church, the churchyard boundary comprises C19 railings that are included in the listing.

The churchyard wall to the rear of the freestanding monument is built in sandstone ashlar with an off-centre gateway and a crenellated parapet, forming a segmental inward curve at the south-west angle of the churchyard. The C19 terminal piers, which were retained from the previous wall, have narrow relief panels carved with scrolls and foliate decoration and shallow pyramidal caps, similarly carved. The tall gate piers have cruciform upper sections inset with small decorative piers, low-relief crosses on the front face, and tall moulded caps. The cast-iron globe lamps are later C20 replacements. The cast-iron gates have scrolled and foliate decoration. The two flights of stone steps and flanking walls form part of the composition.

The upper section of the walls provides the frame for a series of continuous bronze panels, two to the left of the gate and five to the right, with the names of the fallen in relief lettering and shields above the joints. The shields depict the Royal Arms, the arms of the Duchy of Lancaster and the County Borough of Oldham, the RAF badge and the White Ensign. The frieze running across the top of the panels reads THESE TABLETS WERE ERECTED/ BY THE CITIZENS OF OLDHAM/ AS A LASTING MEMORIAL/ TO THEIR FELLOW TOWNSMEN/ WHO GAVE THEIR LIVES/ IN THE GREAT WAR/ ANNO DOMINI 1914 – 1918. The wall’s lower section has a series of bronze panels with the names of those who died in the Second World War.

While the ensemble is listed as an entity, it is the war memorial components which possess the more than special interest.

The aftermath of the First World War saw the biggest single wave of public commemoration ever with tens of thousands of memorials erected across the country. This was the result of both the huge impact on communities of the loss of three quarters of a million British lives, and also the official policy of not repatriating the dead: therefore the memorials provided the main focus of the grief felt at this great loss. One such memorial was raised at Oldham, a densely populated Lancashire mill town, which suffered considerable losses in the conflict: the dead being officially reckoned to number 2,688.

The war memorial commemorating the fallen of the County Borough of Oldham was paid for by funds raised through public subscription. Despite protracted debate about the memorial’s proposed location in front of the parish church - due to the close proximity of the Greaves Arms Public House - support for this central site prevailed. Thomas Taylor, of the Oldham architectural practice Taylor and Simister, was responsible for the overall design, and the sculptor Albert Toft was commissioned to undertake the bronzes. The scheme entailed the rebuilding of the south-western section of the retaining wall of St Mary’s churchyard to carry the names of the war dead, and the relocation of the gateway, originally sited at the wall’s west end, to align with the memorial.

The memorial was unveiled on 28 April 1923 by General Sir Ian Hamilton and dedicated by William Temple, Bishop of Manchester. A ‘sacred chamber’ within the pedestal housed the Rolls of Honour of the 10th (Territorial) and 24th (Oldham Pals) Battalions of the Manchester Regiment, and served as a visitors’ prayer space, an uncommon feature in a civic war memorial. Photographs of the unveiling ceremony suggest that the memorial panels had not yet been affixed to the churchyard wall. The front of the memorial was modified in 1955 to create a window displaying a Roll of Honour with mechanically-turned pages to commemorate those who died in the Second World War, donated by the electrical engineering firm Ferranti, a major local employer.

Following extensive conservation work to the bronze work and other components of the memorial complex, the memorial was re-dedicated on 10 November 2013.

Albert Toft (1862-1949) is regarded as a prominent figure of the ‘New Sculpture’ movement: the late-C19 renaissance in British sculpture which rejected the stylised neo-classicism of conventional figure sculpture in favour of naturalistic, often allegorical, forms. Having undertaken sculptural work for several British Boer War memorials, most notably the Welsh national memorial at Cardiff, Toft was commissioned for a number of First World War memorials including the statuary at the Birmingham Hall of Memory, and in collaboration with Taylor and Simister, the war memorial at Chadderton, a neighbouring local authority to Oldham. The model for the topmost figure of the Oldham memorial was used by Toft for the Royal Fusiliers’ Memorial in Holborn, London (erected 1922) and for the memorial to the 41st Division at Fleurs on the Somme battlefield (erected 1932). A number of Toft’s war memorials are listed.

Oldham War Memorial, including the memorial wall, piers, gates and steps to St Mary’s churchyard, and forecourt walls, steps and balustrade (south side), and the railings to St Mary's Churchyard (west side) are listed at Grade II* for the following principal reasons:
* Historic interest: as an eloquent testament to the tragic impact of world events on the local community, and the sacrifices it made in the conflicts of the C20;
* Architectural interest: the free-standing memorial and its associated structures form an impressive ensemble, executed with high-quality materials and craftsmanship;
* Sculptural interest: a dynamic and finely modelled composition of outstanding artistic merit by the distinguished sculptor Albert Toft, it is one of the most ambitious of its type in a civic war memorial and ranks among Toft’s most accomplished works;
* Group value: it occupies a prominent position in Oldham’s historic centre and has a strong visual relationship with several listed buildings, principally the parish Church of St Mary and St Peter, listed Grade II*, and Oldham Town Hall opposite, listed Grade II.