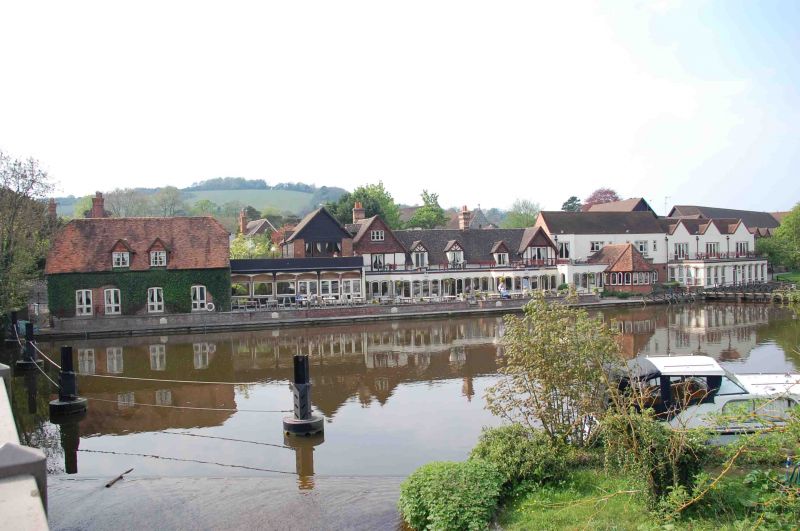 II
The Swan Hotel, formerly The Swan Inn, of early C16 origins with a late C17 component and alterations and extensions of the late C19, C20 and C21.

PLAN: A highly irregular plan strung out along the western bank of the River Thames in a broadly north-south linear arrangement. From south to north: Early C16 rectangular block known as the former stable, with additional stair tower to rear (west); late C20 linking corridor and two storey block at right angles to the river; late C17 L-shaped building (the core of the historic inn) with late C19 additions; two late C20 accommodation blocks to the north, the southern of which is attached to the former summer-house; large C20 and C21 extensions to north and west providing the hotel reception area and further bedrooms.

EXTERIOR: Principal elevation to the east fronting the River Thames. Eclectic mix of conjoined buildings with vernacular touches, comprising (from south to north):
Two storey building known as the former stable block (in use in the late C19 and early C20 as a boat house). Red brick in English bond; tiled half-hipped roof; two tile-hung dormers with casements (inserted post 1907 from photographic evidence); four sets of modern French doors at ground floor level.
Heavily glazed and flat roofed single storey modern link building associated with a two storey brick block built at right angles to the river. The latter with a pitched tiled roof and a weatherboarded first floor. Both appear to be of 1970s or 1980s date and are not of special interest.
L-shaped timber-framed block with brick nogging and pitched tiled roofs. Largely two storey except for the southern cross-gable which has an additional attic storey. Tile hung gables in plain and fish-scale tiles; dormers with applied half-timber decoration other than the northern which is also tile hung. Projecting ground floor with late C20 plate glass windows and doors along its entire length creating a first floor roof terrace.
Two-storey brick accommodation block to the north, part painted white with a pitched tiled roof of late C20 date and not of special interest. This is adjoined by the former summerhouse which is of brick with a tiled polygonal roof with inserted late C20 windows. Further two storey white-painted brick accommodation block on the river frontage with three gablets to the roof which has a projecting ground floor with a flat roof creating a first floor roof terrace; it is of late C20 date and not of special interest. Large late C20 and early C21 brick ranges to the north and west which are also not of special interest.

INTERIOR: Much modernised and remodelled but timber framing is evident in part: cruck frame in former stable block, and timber frame also visible in bedrooms of southern cross gable and likely to survive elsewhere. Roof structure of former summerhouse has a king post roof with arched braces and exposed rafters.

HISTORY: The origins of The Swan Hotel are not known with certainty although on architectural grounds it is clear that there is significant early C16 and late C17 fabric. A 1764 map of Streatley village shows four detached buildings in the position now occupied by The Swan although this somewhat stylised depiction is difficult to relate to the present buildings. The building known as the former stable block and the historic core of the inn are shown on the first edition Ordnance Survey map of 1879. The former stable block is labelled 'Boat house' on the 1912 map and this function is also clearly shown on late C19 photographs. No evidence has been found to confirm its stable function but this is not an impossibility.
The Swan Inn, as it was formerly known, was a popular photographic subject in the late C19 and early C20. A series of photographs by the Oxford photographer Henry W Taunt are a valuable resource, and there are further photographs of a similar date range on display in the hotel from the Francis Frith collection. These photographs indicate that there was relatively little change between the 1870s and 1914. The three principal buildings shown - the former stable; the main historic core of the inn and a picturesque thatched apsidal summer house - are evident throughout this date range. The former stable does not experience any alteration during this time but there are small changes to the main range. In 1880 this building has a south cross gable and a single dormer (the most northerly of those present today) but by 1900 two further dormers and the northern gable have been added. An additional range east of the summerhouse, probably a barn, is evident in a photograph taken from across the river in 1880. While it is possible that there is surviving fabric from this building incorporated in the later hotel, this is not evident.
The hotel has been subject to considerable extension in the late C20, particularly to the north of the historic buildings with further additions constructed in the early C21. It has also been extensively modernised and remodelled internally. The hotel was owned in the late C20 by the entertainer Danny La Rue.

REASON FORS DESIGNATION:
The Swan Hotel remains on the list at Grade II but with a revised list entry, for the following principal reasons:
* A Thames-side hotel of some antiquity which, although modernised and extended, contains C16 and C17 fabric.
* The list entry has been revised and the listed address amended to aid the correct identification of the listed building.