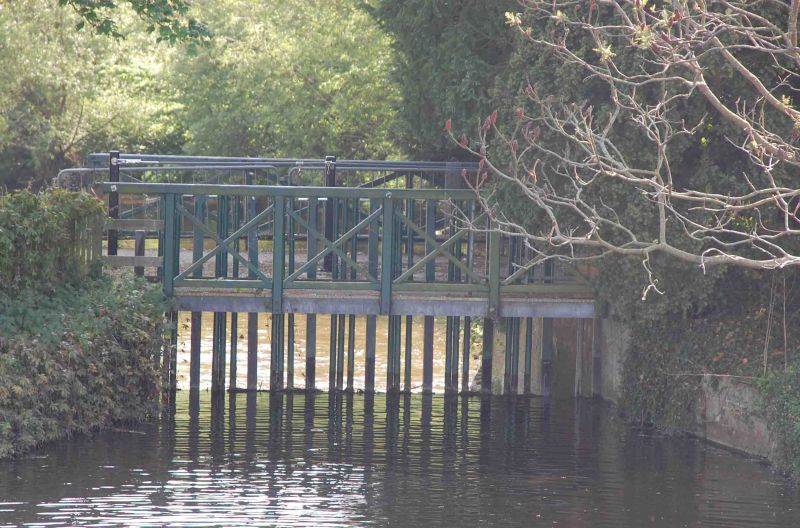 GV II
Paddle and rymer weir. Built 1929 to replace the mill race and on the site of a C16 mill. The weir is 4.9m wide. The frame consists of a base plate set on the river bed and an upper timber beam and is set within brick retaining walls. Removable timber paddles and rymers (upright posts). The mill has been demolished. Paddles and rymers are traditionally stored leaning against timber racks. The late C20 rack on the south bank may replicate the original but is not of special interest.

HISTORY: Paddle and rymer weirs are an early technology, which is known to have been used on the River Thames by at least the C17. They replace the true flash lock, providing greater control and enabling the upper reaches of the river to be navigated. In the 1790s the Thames Commissioners improved the navigability of the river installing new weirs and locks upstream at, for example, Rushey. During the 1880s and 1890s as part of a major overhaul most weirs were rebuilt, further sites with weirs and pound locks were built at new sites (Northmoor and Radcot), and Rushey was upgraded with a new lock and lock house. Some weirs replaced mill races in the 1920s and 1930s (Iffley, Goring and Streatley) or were rebuilt to replace existing weirs (Molesey, part of Rushey). The pound lock was altered and the cottage was added at Iffley in the 1920s. A refurbishment programme took place across the range in the 1990s when Northmoor was completely rebuilt, reusing the metal base plate, and replicating the original weir. Mapledurham, Blakes and Molesey are largely or completely rebuilt. Since 2004 Marsh and Shepperton paddle and rymer weirs have been removed.

'In terms of river engineering the history of the Thames Navigation is of major significance' (Trueman, 2004, 6.1.2). The work of the Commissioners in 1790 to open up central England to waterborne trade to connect to the Thames and Avon Canal was part of a wider network of considerable economic importance. The history and archaeology of the navigation of the river has been recorded in photographs, notably by Henry Taunt, and studied in depth, by Thacker (1920) and most recently by Trueman, confirming the importance of the surviving built structures which enabled it.

Streatley weir is not an early site but like Goring it is of interest that traditional technology, which was relatively cheap to install and maintain, was used in the inter-war period. The late C19 and early C20 also saw an increase in tourism on the river and there may have been picturesque associations which helped determine the choice. The weir is on the site of a mill race in a rich historic context which is recognised in the conservation area and listed buildings within it. It is part of a significant group of locks and weirs at Goring and Streatley identified by the Thames Audit (2004).

SOURCES
Published: FS Thacker, The Thames Highway: History of the Locks and Weirs (1920), reprint as Lock and Weirs, David and Charles (1968)

REASONS FOR DESIGNATION: Streatley paddle and rymer weir is designated at Grade II for the following principal reasons:
* Goring and Streatley weirs are part of a group of locks and weirs in a rich historic river context, Streatley weir replacing the mill race to the former mill, on a C16 mill site;
* The use of cheap traditional technology in the 1920s is of interest for economic reasons and may reflect picturesque ideas associated with increased river tourism;
* Paddle and rymer weirs known only on the River Thames, increased the navigability of the river to connect with the wider canal network.