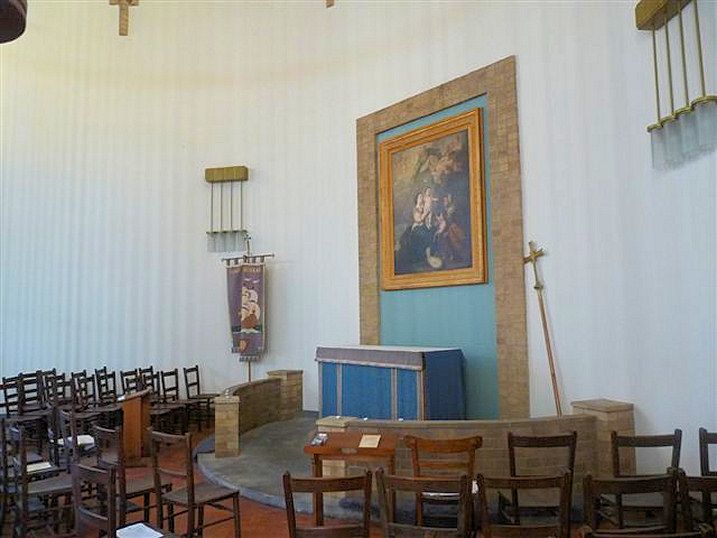 Church. 1931-32, by Welch, Cachemaille-Day and Lander;
enlarged 1964. Buff brick in English bond (roof not visible).
Nave and apsidal chancel in one with south aisle and tower,
north transept, south-east vestry and porch. Continental
Modernist style. A tall structure with semi-circular east end,
a square tower in the centre with a semi-circular apse on its
south side, a very shallow aisle to the east of this, and a
low flat-roofed vestry and porch in the south-east angle; the
walls generally smooth except for the aisle, which is divided
into 3 bays by plain piers, the clerestory which has
horizontal raised bands, and the top stages of the tower which
has raised banding at the top of the apse and vertical raised
banding to the square belfry stage. The windows are mostly
tall narrow rectangles of varied size, with geometrical metal
glazing bars: the bow of the tower has 3 small ones at ground
floor and 3 larger ones near the top; the aisle has square
windows to a low corridor at ground floor, and very tall
windows above, with vertical banding over them; the nave has
small clerestory windows, and west of the tower no other
windows but these. The north side has fenestration matching
that of the aisle, and a square projection opposite the tower
(like a transept). The porch has a zig-zag front wall and
funnelled entry with zig-zag sides. Short modern extension at
west end, with large west window composed of heavy chamfered
concrete mullions and transoms. INTERIOR not inspected, but is
reported (by Pevsner) to have white walls, a flat ceiling, a
raised Lady Chapel in the apse approached by 2 staircases
flanking a brick-faced altar wall, and pulpit and lectern in
the form of simple brick cubes. History: "a milestone in the
history of modern church architecture in England" (Pevsner).