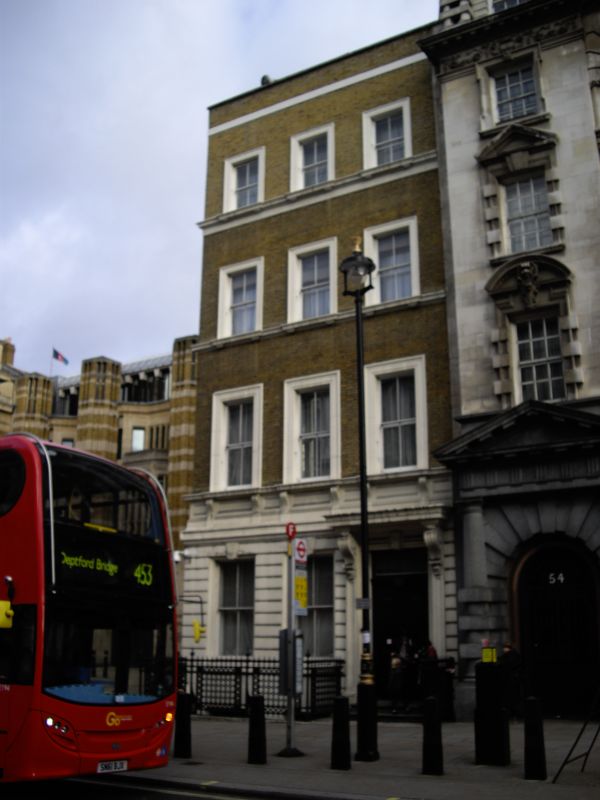 MATERIALS: stock brick with stucco dressings; a hipped slate roof behind a parapet.

PLAN: little can now be discerned of the original plan, which was presumably that of the standard London town-house, comprising a stair hall to the right with the principal rooms on the left and a service wing behind. The service wing and stairs disappeared in the 1980s conversion, but the outline of the hall is still evident on the ground floor.

EXTERIOR: the elevation to Whitehall is three bays wide, with channelled stucco to the ground floor and stucco surrounds to the windows above. The windows are all mid-C19 plate-glass sashes. The panelled double-leaf entrance door sits beneath a projecting cornice on scroll brackets. In front, ornamental latticework railings surround the area. A storey-band separates the first and second storeys, and a cornice above the second storey marks the original height of the building. The return elevation to the north, which now forms part of the forecourt to Whitfield’s Richmond House, is similarly treated.

INTERIORS: the interiors* have been heavily altered throughout, and are not of special interest

*Pursuant to s.1 (5A) of the Planning (Listed Buildings and Conservation Areas) Act 1990 (‘the Act’) it is declared that the aforementioned features are not of special architectural or historic interest.
.

No. 85 Whitehall may originally have been one of the town-houses built in connection with the opening of Parliament Street, created in 1741-50 to link Whitehall with the newly-built Westminster Bridge. After Richmond Terrace was built to the north in 1822-4, No. 85 stood at the corner of the mews, supporting an archway that led through into the stable yard. At some point c1860 the house was remodelled and heightened, receiving its current stucco trim and upper storey.

Proposed for demolition under Sir Leslie Martin’s Whitehall masterplan of 1964-6, it was reprieved following the Willis inquiry in 1970 and the conservation debate which recognised the value within the varied composition of the historic core of Whitehall, which was then under threat from development. As well as the major landmarks, Whitfield’s scheme for Richmond House was informed by what he described as ‘buildings of the people’ (AJ Dec 1988, 50) the small scale, largely commercial buildings adjacent to it, which are embedded in the view south down Whitehall.

In 1982-6 the rear part of the house was demolished, and the front part incorporated (along with a number of other historic buildings) into Richmond House, the new complex of government offices designed by Whitfield Associates. Along with the neighbouring No. 54 Parliament Street it comprises what is known as ‘Block A’.

As well as the major landmarks, Whitfield’s scheme for Richmond House was informed by what he described as ‘buildings of the people’ (AJ Dec 1988, op cit) the small scale, largely commercial buildings adjacent to it, which are embedded in the view south down Whitehall.

85 Whitehall, a C18 town-house altered c1860 and again by Whitfield Associates in 1982-6, is listed at Grade II for the following principal reasons:
* Early date: the main fabric of the house appears to belong to the mid/late C18, and probably relates to the building of Parliament Street in 1741-50;
* Group value: with the rich assemblage of listed buildings on and around Whitehall and Parliament Street.