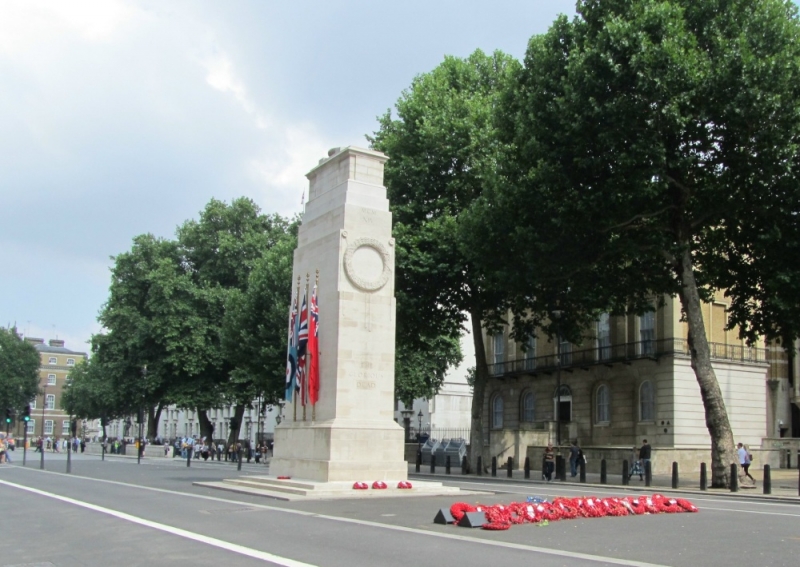 Commemorative structure in the form of a pylon (a classical term for a tall pedestal). Designed by Sir Edwin Lutyens for HM Office of Works in 1919; permanent version erected in 1920.

DESCRIPTION: rectangular in plan. At the top is a plain tomb chest, with moulded cover, on which lies a large laurel wreath. It stands on a three-staged base, which in turn stands on a tall shaft, set back towards its upper section. Beneath is the two-stage base, with cyma recta moulding to the foot of the shaft. The Cenotaph stands on three shallow steps on an island in the centre of Whitehall, in front of Richmond House (to the east) and the Old Treasury (to the west).

The Cenotaph is sparsely enriched and very carefully executed. The dates for the World Wars are inscribed in Roman numerals on the base level above the shaft (those for the First War on either end, those for the Second on the sides). On either end, at the upper corners of the shaft, are carved stone bosses with laurels suspended by stone fillets: these were carved by the celebrated sculptor Francis Derwent Wood RA. The only words on the memorial are inscribed on the north and south sides of the shaft: THE GLORIOUS DEAD. Three flags, for each of the Armed Services, are installed on each side of the base. The entasis (or tapering) of the design is minutely calculated, so that the vertical lines would, if continued, converge on a point 1000ft in the air, while the horizontal lines are fractionally curved, and would share a radial point 900ft below the pavement.

The word cenotaph derives from the Greek for an empty tomb, and this structure commemorates the 1.1 million dead of Britain and the Empire from the First World War, whose remains lie across the globe. The present structure is the second on this site. The original was a temporary erection, rapidly designed by Lutyens and executed in wood and painted canvas, to serve as an incident in the London Peace Celebrations of 19 July 1919 at which marching troops would salute the memory of the British and Empire dead. Having heard that the Paris parade was including a commemorative incident at which the dead were to be honoured, David Lloyd George (Prime Minister 1916-22) requested that a catafalque be erected for this purpose in June 1919, and suggested the inscription ‘The Glorious Dead’. Lutyens rapidly produced this design: early variants considered the addition of a flaming urn finial; Lutyens was also keen on incorporating tinted stone flags rather than actual ones. The first Cenotaph was constructed of painted canvas, plaster and wood.

The Cenotaph has become the national shrine to the memory of the casualties of all recent conflicts. This was not, however, its original intention. It arose out of the need to honour the absent dead, and to inject a sombre note of remembrance into the 1919 peace parade. The losses in the Great War were unprecedented: modern expectations that the dead would be fittingly commemorated required some response from the nation. The vast majority of the dead lay overseas (an official policy early on during the war had forbidden the repatriation of bodies): this sense of absence was compounded by the high proportion of losses whose bodies had disappeared in the explosive intensity of static warfare, and for whom there could be no grave.

When first erected, the Cenotaph immediately caught the public imagination. This substitute for a tomb rapidly became taken up by huge numbers of mourners, who laid flowers at this site in daunting quantities: over 1.25 million persons came to pay their respects in the first week. What had started as a temporary marker for a parade thus became a national shrine, and a permanent second version, in Portland stone, was erected by the Office of Works in time for the Armistice Day parade of 1920, which witnessed the procession of the burial of the Unknown Soldier in Westminster Abbey nearby. This permanent version was capable of extremely refined proportions being applied: extensive calculations were undertaken (Hussey, 392) in achieving this. Lutyens designed movable bronze barriers for use in annual Armistice ceremonies in 1938. The structure underwent major conservation works in 2013.

Sir Edwin Lutyens OM, RA (1869-1944), was the foremost architect of his day and responsible for many of the outstanding commemorative structures raised by the Imperial War Graves Commission in the years following the First World War. His deliberate avoidance of Christian symbolism caused some offence at the time of unveiling, but has subsequently come to be admired for the universality of its messages of honour and remembrance. Other variants on the design by Lutyens are to be found at Cardiff, Derby, Maidstone, Manchester, Reading, Rochdale, Southampton, Hamilton (Bermuda), Hong Kong and London (Ontario). The success of the Cenotaph cemented his reputation as the country’s pre-eminent architect.

The Cenotaph is in the guardianship of English Heritage.

The Cenotaph is listed at Grade I for the following principal reasons:
* Historic interest: as the principal national memorial to the dead of Britain and the British Empire in the First World War and subsequent conflicts of the C20;
* Architectural interest: as an outstanding work of creative genius by Sir Edwin Lutyens, one of the nation’s foremost architects, which, through its subtle classicism, creates one of the most admired memorials in the world;
* Civic prominence: as the focal point of the annual Remembrance Day commemorations, located in the heart of Government;
* Commemorative power: as one of the most universally admired memorials in the world, embodying the profound grief caused by the tragic losses of the First World War and subsequent conflicts. Its austere and restrained design has been readily responded to by thousands, in search of a place to lay tributes in memory of the absent dead;
* Design and construction: the very carefully proportioned form, with its minutely calculated geometry, was executed with extreme care and the fine quality of the masonry (in spite of weathering) is noteworthy;
* Group value: for its proximity to many other listed buildings along this hugely important public thoroughfare, and for its relationship with other prominent memorials located between Trafalgar Square and Parliament Square.