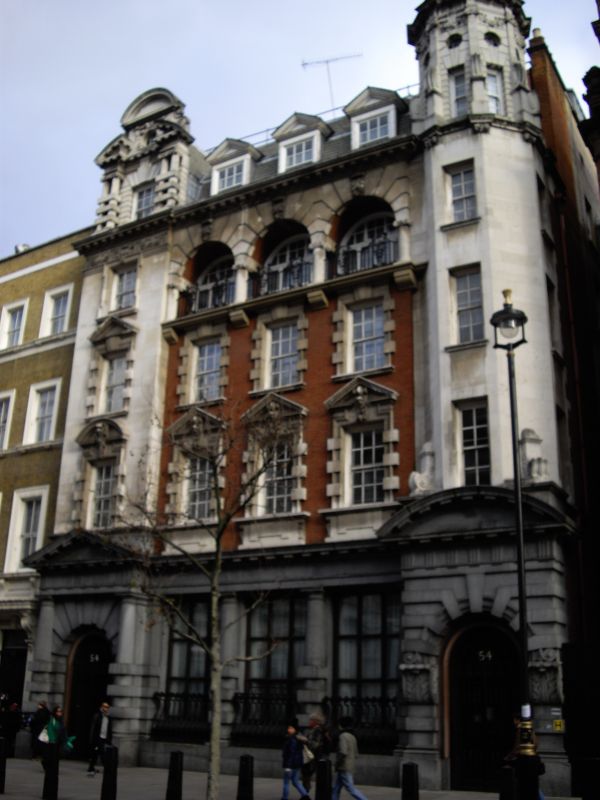 PLAN: the building was much altered in the 1980s, when the rear part was completely rebuilt, leaving only the Parliament Street façade with a single room’s depth behind. On the ground floor is a large banking hall, with entrance lobbies right and left. The upper floors comprise a series of small offices.

EXTERIOR: the five-bay, five-storey elevation to Parliament Street is artfully asymmetrical, deploying a Franco-Flemish Renaissance idiom with English Baroque influences; an approach clearly influenced by Sir Richard Norman Shaw’s work of a decade earlier at New Scotland Yard. The granite-faced lower storey has rusticated Doric columns supporting a frieze and cornice, with scrolled ironwork (including the name ‘GRINDLAY & Co.’) between. The two big round-arched entrances to left and right have Gibbs surrounds and pediments (triangular and supported on columns to the left, segmental on leafy scroll-brackets to the right) and contain decorative iron gates.

Above, the two outer bays are treated as projecting turrets. The left one is square with pedimented Gibbs windows and a complicated double-pedimented aedicule at attic level, while the right one is octagonal and rises into a domed cupola. The middle three bays are of brick, with Gibbs window surrounds in stone; on the first floor these have aprons and open pediments containing scrolls and putti. The third storey is corbelled out as a little gallery, with three stone arches containing further ironwork. The mansard roof sports three big pedimented dormers. (The rear part*, facing the small yard behind, was completely rebuilt to a new design during the 1980s redevelopment.)

INTERIORS: the main survival of the ground floor is the banking hall. This has three-quarter height fielded oak panelling with ionic pilasters supporting a pulvinated frieze and a deep cornice. At one end is a large semicircular recess containing a fireplace (a plain marble surround, coloured tiles), with much carved decoration to the arch and overmantel. The panelling also encloses the two entrance lobbies, which have part-glazed double doors with brass handles, kick-plates etc. The ceiling above has a rich modillion cornice. The surviving front rooms above retain fireplaces in tall Arts and Crafts oak surrounds. The original stair, which had square newels supporting a scrolly wrought-iron balustrade, has been removed; the present stair* dates from the 1980s work, as do all the rooms at the back*.

* Pursuant to s.1 (5A) of the Planning (Listed Buildings and Conservation Areas) Act 1990 (‘the Act’), it is declared that these aforementioned features (the rear parts of the building as rebuilt in 1982-6, including the present stair) are not of special architectural or historic interest.

Parliament Street was formed in 1741-50 to connect Whitehall with the newly-built Westminster Bridge. The present No. 54 dates from 1898-9, when two of the houses on the eastern side of the street were demolished to make way for the premises of Grindlay’s Bank. The architect was the bank specialist Alfred Williams (1832-1922).

Proposed for demolition under Sir Leslie Martin’s Whitehall masterplan of 1964-6, it was reprieved following the Willis inquiry in 1970 and the conservation debate which recognised the value within the varied composition of the historic core of Whitehall, which was then under threat from development.

As well as the major landmarks, Whitfield’s scheme for Richmond House was informed by what he described as ‘buildings of the people’ (AJ Dec 1988, 50) the small scale, largely commercial buildings adjacent to it, which are embedded in the view south down Whitehall.

In 1982-6 the rear parts were demolished and rebuilt, and the retained front part incorporated (along with a number of other historic buildings) into Richmond House, the new complex of government offices designed by Whitfield Associates. Along with the neighbouring No. 85 Whitehall it comprises what is known as ‘Block A’.

54 Parliament Street, a former bank of 1898-9 by Alfred Williams, altered and partly rebuilt 1982-6 by Whitfield Associates, is listed at Grade II for the following principal reasons:

* Architectural interest: a spirited Free Baroque design clearly influenced by Richard Norman Shaw's nearby New Scotland Yard;
* Interior: although the rear part of the building has been entirely reconstructed, the impressive panelled banking hall survives on the ground floor;
* Group value: with the rich assemblage of listed buildings on and around Whitehall and Parliament Street.