A Grade I Listed Building in Martock, Somerset 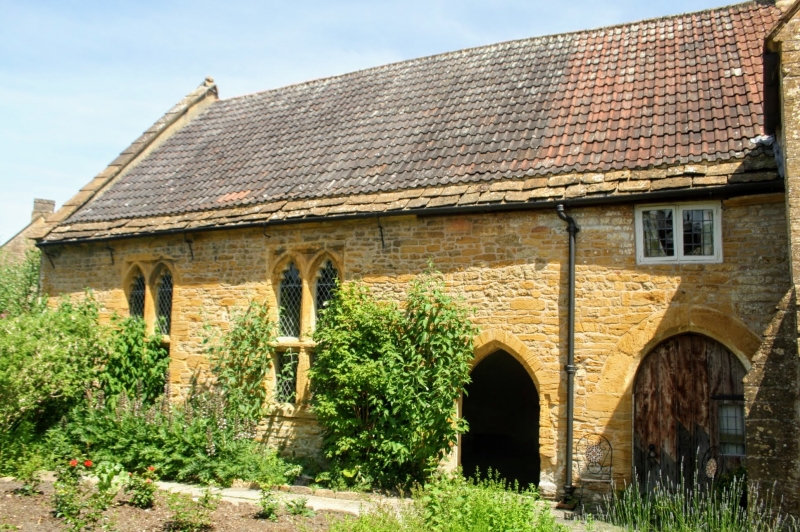 Medieval priest's house. C13, with C14 and C15 extensions, and small C19 wing. Ham stone coursed rubble, some ashlar work and dressings; double Roman clay tile roofs between stepped coped gables; brick chimney stacks. T-plan, single and
2-storey. The projecting wing westwards is the early C14 hall, with north-west corner buttress; west window 2-light plate tracery with mullion, no label; north and south walls each have two smaller windows to match, but without the crowning quatrefoil; pointed arched doorways at east end each side, with later casement windows over. The east crosswing of early C13 with small early C19 extension northwards; the south gable has a plate tracery window at first floor level, and below it two 3-light hollow-chamfer mullioned cinquefoil cusped windows, separated by a buttress, both with square labels; left of the upper window a slit window surrounded by unexplained drilled holes, possibly a stairlight; the west face has a single bay of 2-light chamfer-mullioned windows, the upper traceried, no labels: the C19 wing of 2 bays, with 3-light horizontal-bar casements above, and below two 2-light, one with earlier glazing, and to right a doorway screened by a timber weatherboarded flat roofed porch. In the south-east corner is the late C15/early C16 kitchen, which has no direct link to the house; the west elevation has a 2-light chamfer-mullioned flat-headed window without label to each level, and to left an almost triangular arched doorway. Inside, the hall has a 4-bay moulded arched collar-truss roof, with 3 purlins each slope, the lower and third bays double-windbraced and the second bay single-braced, a re-roofing of the same date as the kitchen; cinquefoil rere-arches to windows, no fireplace; the screen/gallery all covered in. The room in the crosswing to rear has a 4-panel deep moulded beam ceiling, probably C15; with a later fireplace inserted, possibly later C17, having chamfered stone jambs, and large slightly chamfered timber crossbeam. The first floor not examined. The kitchen has a 4-bay arched collar-truss roof, the panels between purlins covered but probably windbraced as the main hall; south bay much smoke- blackened, as is the south gable wall, which has a very wide but shallow fireplace with a near-triangular moulded arch. The Treasurer of Wells Cathedral became rector and patron of Martock 1227-8 (hence the house name), and the house is first mentioned in 1226. The plot was enlarged 1262, and the hall apparently added 1293-94. It remained part of the manor of Martock Rectory until sold in 1840. It remained in private hands until it was left to the National Trust in 1970.(VCH, Vol III, 1974; Saunders, Preb. G.W. Notes on the History of Martock Hundred Western Gazette, 1955; Wood E, C13 Domestic Architecture in England; Arch-Journal Supp, vol CV, 1950; Wood, M. The English Medieval House, Ferndale, 1981-includes plans of house).
ST4616519085