A Grade I Listed Building in Derby, City of Derby 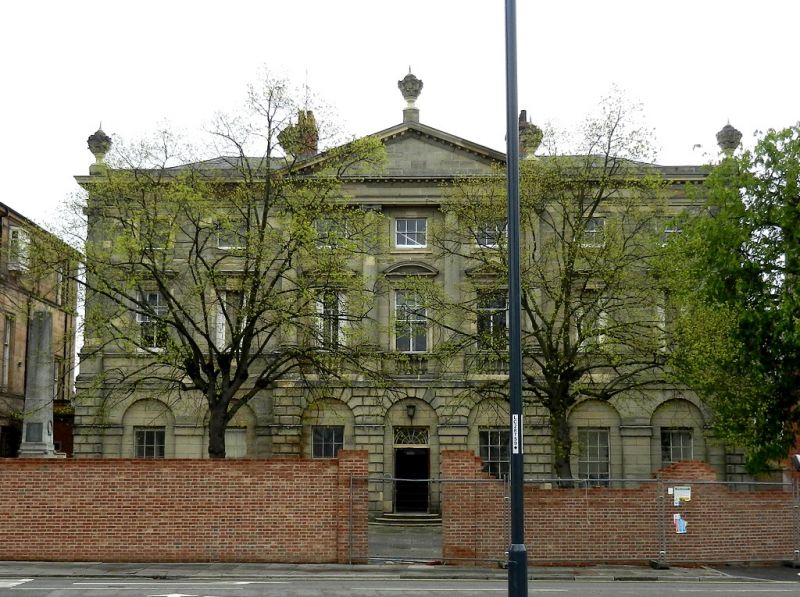 Town Mansion, subsequently school, at present vacant. 1766-7, extended c.1807-9, 1874-8, 1890's and 1914. Original mansion by Joseph Pickford for John Gisborne. First extension and internal remodelling for William Strutt. Extension by Thompson and Young 1874-8 for Derby School. Main Mansion: fine ashlar front, otherwise of red brick. Slate roof. Palladian style. 3 storeys. 7-window range in all at first floor of 6/6 sash windows over a ground floor treated as a blind arcade which is partly of chamfered rustication. 6/6 sashes within the arcade. The central 3 'piano nobile' windows are set within a fine Roman Ionic attached portico and have pediments and balustraded panels below (some balusters missing). Sashes to sides have cornices. 3/3 sashes to 2nd floor. Plain frieze and modillion cornice support 5 large urns (one at present dismantled for reasons of safety and stored in the side yard). Corner pilasters also to rear which support 2 further urns. Sides of the houses are in brick and have similar sashes. To rear a lower 2-storey service wing with similar sashes.

INTERIOR: The impressive interior is on a grand scale. Entrance hall decoration includes triglyph and modillion cornice, fireplace of Hoptonwood stone with cast-iron grate and elaborate doorcases with panelled mahogany doors. The cross beams with plaster decoration were probably added late C19/early C20 for strengthening purposes. Cantilevered staircase in inner staircase hall also of Hoptonwood stone with richly carved tread ends and fine wrought-iron balustrade, almost certainly by Benjamin Yates, successor to Robert Bakewell, and in a design produced twice by the latter. Elaborate Venetian window lights the staircase and has Gothic detailing of c.1807. Plaster decoration to ceiling. The Saloon to ground floor left has a fireplace of Siena and Carrara marble and very fine and rich plaster decoration to frieze and ceiling, also mahogany doors within fine doorcases. Further plasterwork in the room to right with similar mahogany doors and doorcases and a C19 fireplace. Fine cornices, moulded window reveals, some carved, dado rails and 6-panel doors in many rooms. Further fireplaces also survive on all floors including one of alabaster on the first floor with graffiti including initials with dates of the 1880's, doubtless of Derby schoolboys. This fireplace has a cast-iron grate. Stone secondary staircase with plain iron balustrade and ramped handrail. Roof only visible in small part through a couple of access points but appears original.

EXTENSION for Derby School (Pearson Building): To left of the main range and connected by a single-storey link building (doubled in front probably earlier C20 but retaining inside the original rusticated front of 1874-8) is the extension for Derby School of 1874-8, in ashlar, rear in brick, and in an austere classical style, the ground floor stonework rusticated. 3 storeys, a 6-window front at first floor in all of sash windows with margin lights, the central 3 grouped under a gable which is formed into a pediment by the cornices of the second floor outer sashes. The central sash has a small individual pediment. Wider bay to right with staircase behind. Further similar sashes to sides and rear on all floors. In addition on the left end, and giving access to the former assembly hall, is a covered external stair with decorative cast-iron detailing and balustrade. On the front and below the central first floor window is a foundation stone with inscription dated 1874, perhaps raised to its present position during construction.

INTERIOR OF EXTENSION: Stone staircase with plain iron balustrade and high dado of matchboard panelling. Almost all the first floor is occupied by the large former assembly hall or 'Big School' with walls articulated by pilasters which support a ceiling divided into long transverse compartments. The central end section forms an adjoining area with similar fenestration linked by an opening framed with pilasters forming a proscenium arch.

FURTHER LINKED EXTENSIONS and SUBSIDIARY FEATURE: Further lower extensions in brick and in vernacular revival style of the 1890's and 1914 to left including the former Headmaster's House. From the front left hand corner of the mansion extends an ashlar wall which curves round to King Street, where there is an end-pier in brick with a stone roundel dated 1891. Near the corner of the mansion is an iron pedestrian gate.

HISTORY: St. Helen's House was built for John Gisborne, an alderman of Derby, as his town mansion. His country seat was Yaxall Lodge in Staffordshire. He was a Whig landowner, was associated with the Duke of Devonshire, and had been High Sheriff. After his death in 1779 the house was used by his son Thomas, a friend of William Wilberforce. In 1801 Thomas leased and subsequently sold the house to the hugely wealthy William Strutt, FRS, eldest son of the cotton pioneer Jedidiah Strutt, who was a director of the family cotton spinning and silk throwing enterprises, now part of the Derwent Valley Mills World Heritage Site, and an inventor and important local figure (Chairman of Derby Improvement Commission 1788-1829). It was Strutt's principal residence and he made some alterations for this reason, including more service accommodation to the east. This was truncated in 1877 for a street extension. Amongst his innovations Strutt introduced a hot air heating system. Strutt died in 1830 and the house was inherited by his son, Edward, who was elected MP for Derby a few months after his father's death. However he lost his seat in 1847 and moved to Kingston Hall, Notts. Subsequently St. Helen's House was only in occasional family use. In 1860 Strutt offered to sell the house to the governors of Derby (Grammar) School. The house was purchased in 1862 partly by mortgage raised by Derby Corporation which became sole owner on repayment in 1873. A large extension was designed for the school by Thompson and Young in 1873 and built 1874-8. Derby School occupied the buildings until 1966. They were subsequently used by the Derby and District School of Art and the WEA until 2004.

SUMMARY OF IMPORTANCE: St Helen's House is an outstanding Palladian town mansion of 1766-7, designed by Joseph Pickford for John Gisborne. It is the most important and largest surviving domestic building in Derby, and one of the finest purpose-built town houses to survive in this country outside London. Very significant interior features such as the staircase, plasterwork and fireplaces survive. The large extension for Derby School, by Thompson and Young of 1874-8, set-back and in simpler but similar style, was an attempt, unusual in the 1870's, to add to but not unduly challenge a building already recognised as of great importance. The occupation and ownership by the Strutt family for sixty years is a very significant historic connection with the Derwent Valley World Heritage Site. The whole ensemble forms part of a significant group of historic buildings in this area of Derby including the war memorial, (q.v.), immediately in front.