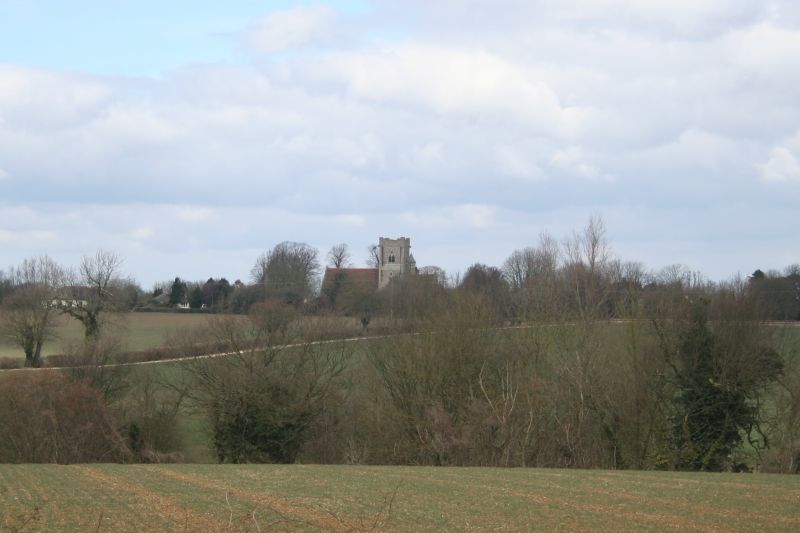 II*
DATES/ARCHITECTS:
The core of the church, including the N, S and W crossing arches and probably the foundations of the N and S transepts are c.1394, built to serve a college founded at that date. The college was suppressed at the reformation, and the nave was purchased by the parishioners. The choir appears to have been demolished, although the tower was left standing. The nave fell into disrepair and was rebuilt in brick in 1708. The tower was rebuilt and a chancel added c.1750 by Samuel Tuffnell. The church was almost wholly rebuilt in 1868 by F Chancellor preserving only the medieval crossing arches.

PLAN:
Cruciform. An unaisled nave with N porch, central tower with N and S transepts and N stair turret, chancel with vault under and SE vestry.

EXTERIOR
Very tall and French in proportions with a dynamic composition and massing typical of Chancellor. The windows are all similar and have late C13-style Geometric tracery with foiled circles above cusped, pointed lights without ogees. The outer arches of the windows all have a band of chequer board flint flush work. Tall chancel with diagonal buttresses and 4-light E window. There are no other windows in the chancel. The N and S transepts also have diagonal buttresses and 2-light windows in each face. The N transept has a N door with a hood mould with head stops. The central crossing tower has slight offsets on the N and S faces topped by bands of carved quatrefoils. That on the N has a clock set into it. The parapet steps up at the corners. Below the parapet is a moulded string course with gargoyles on the corners. There are 2-light louvered belfry openings in each face. The tower NE stair turret is octagonal and is topped by a conical stone roof with a band of openwork quatrefoils. The SE vestry has a lean-to roof and is connected to the crossing tower by a giant flying buttress. It has a small, three light S window with a plain square head and unfoiled lights and a chamfered E door.

The nave has diagonal buttresses, four 2-light windows on each side, and a 3-light W window. The N porch is of timber on dwarf stone walls and has a double arcade of short columns with moulded capitals and bases on either side. The outer opening has arched braces, and the gable has bargeboards pierced with quatrefoils.

INTERIOR
The interior is plastered and painted. The E and W crossing arches are of two chamfered orders, the outer continuous, the inner on polygonal responds with moulded capitals and bases. The W arch to the nave has a further large outer arch. The N and S crossing arches to the transepts are similar but the inner orders stand on moulded corbels. The nave and chancel roofs are arch braced; the braces descend to moulded stone corbels with scissor braced common rafters. There are common rafter roofs in the transepts.

PRINCIPAL FIXTURES
Most of the fittings were installed in 1868 when the church was largely re-built, and are in a similar late C13 Gothic-style to the outside. Chancel reredos with trefoiled arches under gables with crocketted finials extending across the whole E wall. The arches stand on polished marble shafts with moulded bases and carved capitals. C19 timber communion rails with short, round posts, shaft rings and moulded capitals. Choir stalls with shaped ends, poppy heads and openwork fronts with rows of quatrefoils. Font with a deep, circular bowl decorated with carved roundels on short marble shafts and a deep circular base. Nave benches have convex shouldered ends on short, circular timber shafts. Stained glass in E and S transept S windows also 1868 by O'Connor.

In the nave, the tops of two former altar tombs of the C15. One has indents for figures of a bareheaded man in armour and a priest separated by a column, c.1480-90. The other has indents for a man and a woman, probably Humphrey Stafford, Duke of Buckingham, d.1460 and his wife Katherine, d.1480. In the chancel, several wall monuments to members of the Tuffnell family, including Samuel Tuffnell, d. 1758, diplomat and MP, a marble bust on a shallow chest with a grey marble obelisk behind and flanking urns, attributed to Henry Cheere. Sir William Joliff, d. 1749, Tuffnell's uncle and benefactor, an inscription panel below an urn with an obelisk, lavishly carved with flowers and cherubs, also perhaps by Cheere.

HISTORY
The college at Pleshey was founded in 1394 by Thomas, Duke of Gloucester, who also held Pleshey Castle. He also built collegiate buildings to the S of the church and created a new cemetery. The college had nine priests including the master, plus two clerks and two boy choristers. It was augmented by three more priests and six poor men in the mid C15, but the numbers had fallen to a master and five priests, two clerks and two boys by the Reformation. There was already a parish church at Pleshey, but it was apparently on a different site in the NW part of the village as the parson and parishioners gave their consent to moving the church. It is likely that the parishioners subsequently used the nave of the collegiate church as the parish church, as they purchased the nave after the college was dissolved at the Reformation. The church was rebuilt in brick in the C18, retaining only the medieval crossing arches, but Georgian church architecture was not valued in the C19, and the whole building except for part of the crossing was rebuilt in 1868. The architect, Frederic Chancellor of Chelmsford and London was a well known church architect who worked widely in Essex, London and elsewhere.

REASONS FOR DESIGNATION
Holy Trinity, Pleshey is designated at Grade II* for the following principal reasons:
* The core of the central tower retains features from a collegiate church of the very late C14.
* It was handsomely rebuilt in 1868 by Frederic Chancellor, a well known church architect, in a boldly picturesque manner, and retains many contemporary furnishings.
* It has excellent C15 tomb slabs and C18 monuments.