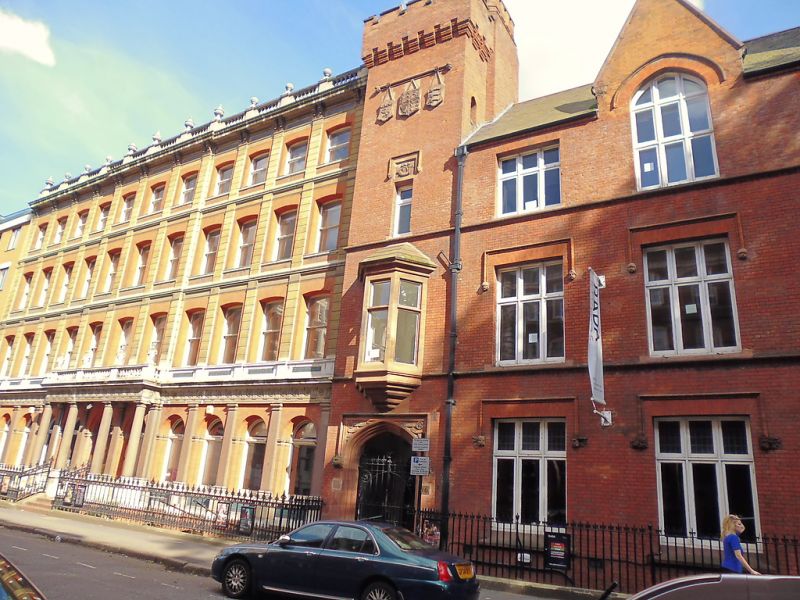 Drill hall, now an arts centre. 1882-3. By Samuel Knight. For
the Bloomsbury Rifles. Red brick with sandstone dressings and
continuous sill strings. Tiled roof with central gable.
EXTERIOR: 3 storeys and basement. 3-window symmetrical facade
with attached, taller, battlemented entrance tower to left.
Four-centred entrance arch with a hood mould having carved
Burgesian crowned lion label-stops and rose and riband
spandrels. Above, a 3-light transom and mullion oriel window.
2nd floor, narrow tower window with over-panel depicting the
hanging horn, symbol of the Rifle Brigade (to which the
Bloomsbury Rifles was affiliated). Above this, 3 shields
portraying, from left to right, the arms of the Duke of
Bedford (the ground landlord), the royal arms and those of the
county of Middlesex. To right, 3-light transom and mullion
windows with gauged brick flat-arch heads, the ground and 1st
floor having hood moulds with label stops in the form of
carved heads; those to ground floor being moustached
volunteers' heads. Central 2nd floor window pointed with hood
mould and gable.
INTERIOR: survives largely intact with a stair having turned
rails. Drill hall to rear (now a theatre) with metal trussed
roof and glazed lantern running the full length of the room;
originally with a small stage to the south, now enclosed. The
present bar was the mess room and has a gothic chimney-piece
with sunken quatrefoils. 1st floor officers' mess with a good
Gothic chimney-piece of Caen stone, enriched with a
castellated canopy and the arms of commanding officers of the
regiment; ceiling and walls panelled with diagonally-set deal
planks. Adjoining small room with oriel window was the
colonel's room; also with a Gothic fireplace and panelling and
more ornate fittings. A 2nd floor former billiard room, above
the officers' mess, with a chimney-piece similar to that in
the ground floor mess.
SUBSIDIARY FEATURES: attached cast-iron railings with urn
finials to areas.
HISTORICAL NOTE: rifle volunteer corps sprung up in 1859-60 as
a popular response to the perceived threat of invasion from
France. The volunteer units were raised principally from the

lower middle and upper working classes on a local basis.
Patriotic in origin, they were part military forerunners of
the Territorial Army and part semi-sporting outfits which
offered comradeship with organised outdoor leisure activities
and exotic uniforms. None saw action until the Boer War. The
Bloomsbury Rifles were founded in 1859 by Thomas Hughes, whose
Tom Brown's Schooldays had been published the previous year.
The drill hall, necessary for both military practice and
social intercourse was funded by the commanding officer,
Lieut-Col. Richards; Knight, the architect, had a practice at
Cornhill and was a captain in the regiment.