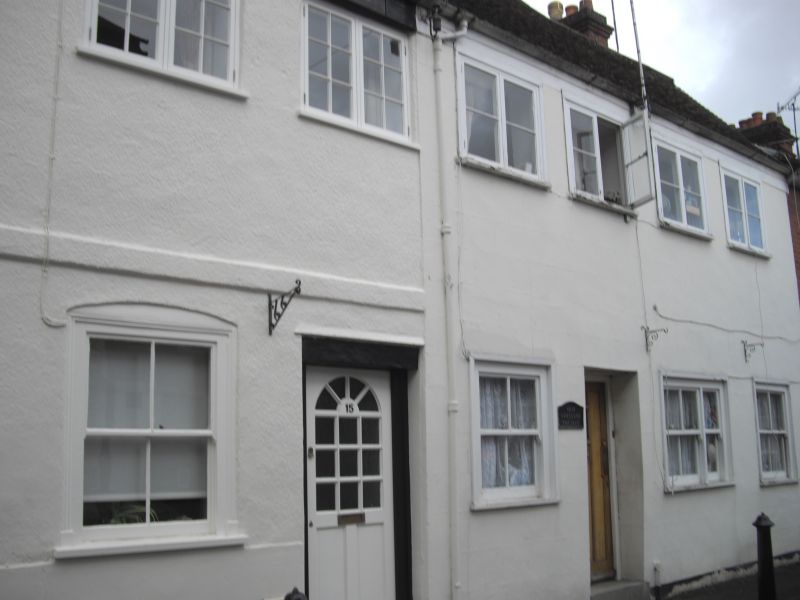 2.
Originally one house dating back to late C14 with extension sin late C17 to south
and refronted and altered C19. Timber framed. 2 storeys with rough cast and
rendered front. Gable end old tile roof with hipped later south end. Boxed eaves.
2 gabled projection to rear. Band between storeys to front of No 15. 6 two light
C19 casements 1st floor. No 15 has flush framed sash window and door in architrave surround ground floor. No 17 has 3 later C19 sashes and plain door, ground floor. Interior of No 17 shows evidence of open hall and solar to north mostly in No 15. Chamfered beams. Hammer head wall posts. Remains of original stone rubble base beneath staircase. On 1st floor evidence of heavy wallplates, part of wall post and lower part of apparently of the beams. In attic one truss and bay of roof is clearly exposed, principals with collar supported by crown post with angled braces and above collar springing from above the angled braces of crown post, scissor braces-side purlins with curved wind braces as well. This truss would appear to be the original gable end before extension to south. a considerable amount of the framing still remains concealed. Some of the wattle and daub partition walls remain.