Statue of Charles James Fox at North End of Garden 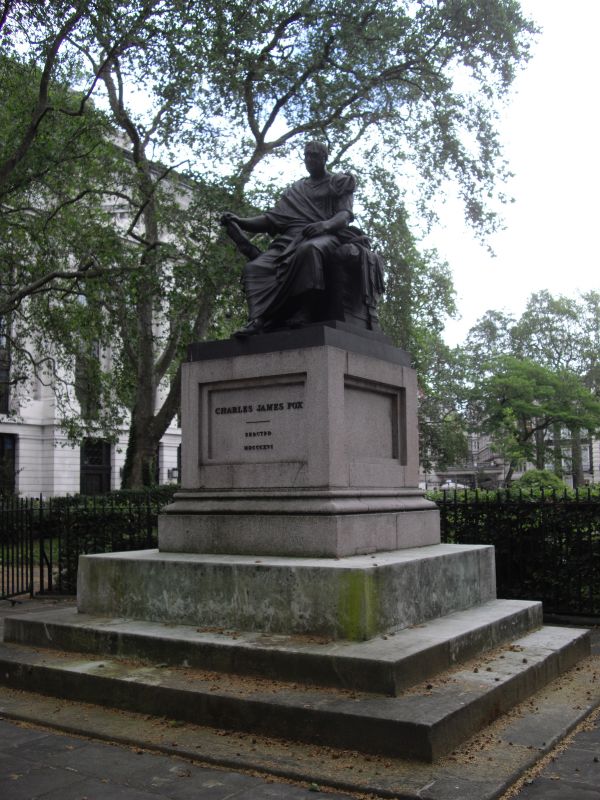 II*
This list entry has been amended as part of the Bicentenary commemorations of the 1807 Abolition Act.

Statue of Charles James Fox, situated at the north end of Bloomsbury Square gardens; the statue faces north. Completed 1814; erected 1816. The sculptor was Richard Westmacott the younger. A bronze figure on a granite pedestal. Fox is seated (the reason for this is thought to be that he was too portly to appear dignified standing) dressed in consular robes and sandals. With his right hand he holds the Magna Carta; the seal of the scroll closely imitates the original in the British Museum. On each face of the pedestal, a recessed panel. On the north face, in Roman letters made of brass (two of which are slightly damaged): 'CHARLES JAMES FOX / ERECTED / MDCCCXVI'. Three steps and plinth of Portland stone.

HISTORY: Charles James Fox (1749-1806), politician, was born into an influential political family, the son of Henry Fox, 1st Baron Holland, and Lady Caroline Lennox. Fox was given unusual freedom from an early age; he decided to enroll at Eton, where he excelled as a classical scholar. He then went to Oxford, but left without a degree, embarking instead on a grand tour which lasted from 1766 to 1768, during which he formed connections with European leaders in fashion, politics and letters. On his return, at the age of nineteen, he became MP for Midhurst; in 1780 he was elected MP for Westminster, retaining the seat, with brief interruption, until his death.

Throughout his career, Fox was to champion causes associated with liberty - he was in favour of American independence and the French Revolution, and supported the abolition of the slave trade and Catholic emancipation - but his taste for gambling, drinking, and romantic intrigue earned him a reputation for excessive freedom, resulting in personal immorality and political recklessness. Nevertheless, his professional rise was swift, initially in Lord North's government. Influenced by Edmund Burke, Fox was increasingly convinced that George III wished to undermine parliamentary government, and he became a leading figure in the whig party. His support for America in its War of Independence made him many enemies, notably the king and Lord North. Nevertheless, in 1783 Fox joined with North in a short-lived coalition. Thereafter, Fox led the opposition to the new prime minister, William Pitt the younger. Fox was eloquent in his support for the French Revolution, and his criticism of Britain's war with France, though he was shocked by the eventual violence of the Revolution. On Pitt's death in February 1806, Lord Grenville formed a 'ministry of all the talents', in which Fox was foreign minister. His brief tenure was clouded by failed negotiations for peace with Napoleon, towards whom he had once been sympathetic. Fox died in September 1806.

Fox had been a consistent opponent of the slave trade, 'a practice so enormous, so savage, and so repugnant to all laws human and divine', that he said he 'should prefer the abolition of it to any political good that can be gained or even wished, for the Party or the country'. One of his last political acts was to move a resolution for the general abolition of the slave trade, asserting on 10 June 1806 that, 'this House, conceiving the African slave trade to be contrary to the principles of justice, humanity, and sound policy, will, with all practicable expedition, proceed to take effectual measures for abolishing the said trade'. The House of Commons voted overwhelmingly in favour of the resolution, and the Lords assented on 25 June. For his political supporters, the abolition of the slave trade came to be emblematic of the liberty so dear to Fox. Francis Russell, 5th Duke of Bedford, built a temple of liberty at Woburn Abbey dedicated to Fox; the first pediment proposed for the unfinished temple after Russell's death in 1802 showed a slave being crowned with the cap of liberty. Fox's memorial in Westminster Abbey, erected in 1822, shows the politician on his deathbed, supported by Liberty, to whom he appeals on behalf of the slave kneeling at his feet.

The committee appointed to arrange Fox's memorial raised £12,450 (his friends having already paid for his funeral in Westminster Abbey, cleared his debts, and given his wife a pension); it was decided that besides the marble monument in Westminster Abbey, a bronze statue should be erected. Richard Westmacott the younger was sculptor of both. The statue was completed in April 1814, and a number of possible sites were considered. Bloomsbury Square, suggested by the 6th Duke of Bedford, was chosen as being in an area associated with the whigs; Fox sits looking down Bloomsbury Place towards the statue of his friend the 5th Duke of Bedford, also by Westmacott. The statue was unveiled on 19 June 1816. A bronzed plaster cast was placed in the entrance hall of Holland House, the Fox family's London house.

The statue was restored in 2006 to mark the bicentenary of Fox's death.

REASONS FOR DESIGNATION:
The statue of Charles James Fox is designated at Grade II* for the following principal reasons:
* A handsome early C19 statue by Richard Westmacott the younger, and an early appearance of this type of bronze memorial
* The statue is of particular historical interest, having been erected to commemorate Charles James Fox, who played an important role in securing the passage of the 1807 Act abolishing the slave trade.
* The statue contributes to the essentially C18 and early C19 aspect of Bloomsbury Square; the connection between the statue of Fox and that of Francis Russell, Duke of Bedford, which faces it from Bedford Square, adds to its historical and topographic importance, as a well-preserved piece of neo-classical urban planning with a strong political message
* An important public sculpture commision by a leading Regency aristocrat and aesthete