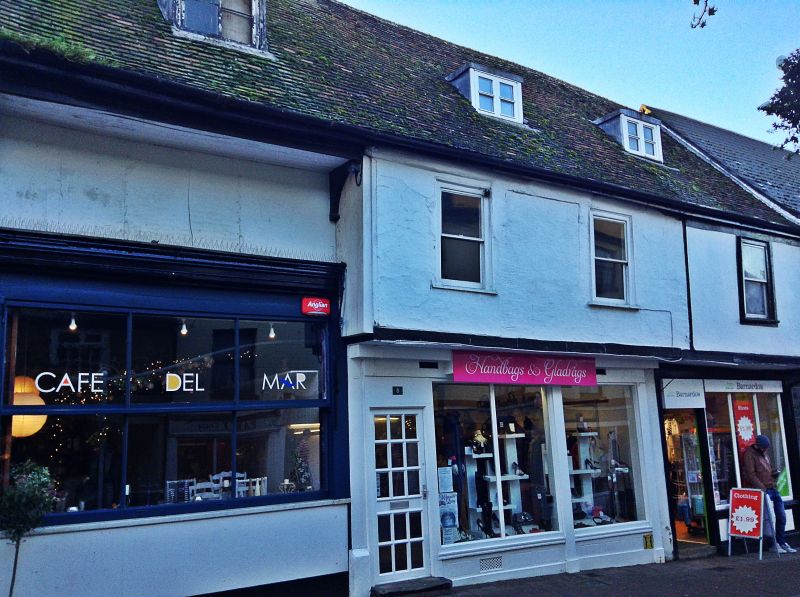 House; now divided into shops, with storage above. C15, with
C16 and later alterations. Timber-framed and rendered; old
plaintiles.
EXTERIOR: 2 storeys and attics. A much-altered house of
Wealden type, originally with a 2-bay open hall flanked by a
jettied wing on the north, the whole under a single roof-line.
In the C16 the northern bay of the hall was ceiled over and
jettied. The remaining recessed hall bay has the overhang of
the roof supported by small solid brackets.
The upper storey has no window and there is no internal access
to it from below or from the buildings on either side. The
ground storey contains shop premises which overlap on the
south into No.6 (qv). The 2 jettied bays, now divided between
Nos 8 and 9, both contain shop premises. The 1st storey has 3
large- paned sash windows in flush cased frames. 3
segmental-headed lead-covered dormers with rendered cheeks
have 2-light casement windows with a single bar to lights. C20
shop fronts on the ground storey.
INTERIOR: No.8 has exposed timbers to each storey, part of the
original rear wall with studding, and a later rear extension
beyond it. A main beam has mortices for a former service end
partition. No original features are exposed in No.9, but
during restoration of the adjoining property the roof was seen
to have a plain crown-post.