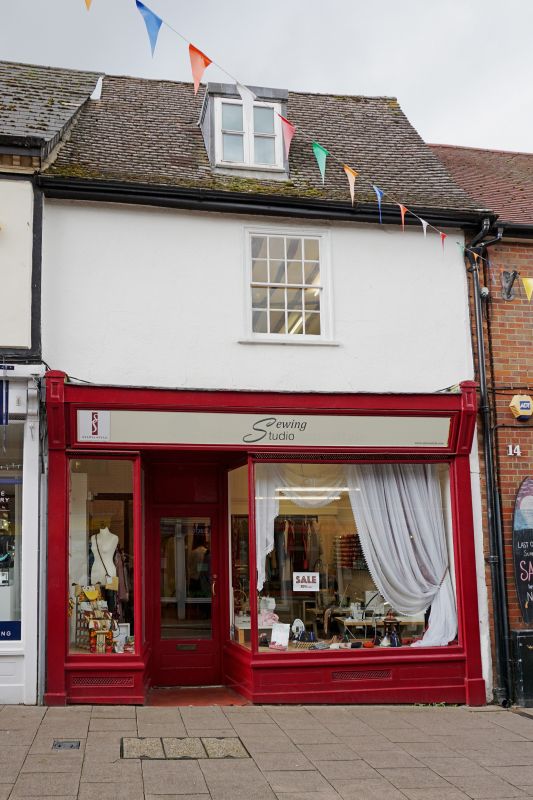 Shop. C16 and early C17. Timber-framed and rendered;
plaintiled roof.
EXTERIOR: 2 storeys and attics: a one-bay jettied front range
and a small rear wing; the frontage seems to have been longer
originally. A single 16-pane sash window to the upper storey
in a flush cased frame and a single segmental-headed
lead-covered dormer in the roof with a 2-light single bar
casement window. The ground storey has a late C19 shop front
with a recessed off-centre fully glazed entrance door,
projecting fascia and panelled stall boards.
INTERIOR: on the ground storey the main ceiling beam has a
double shallow roll-moulding and run-off stops. Good close
studding along the rear wall on both storeys has been exposed
during 1992 alterations.
The front wall has the remains of a T-shaped window with
smaller side-lights, now blocked, with the larger central
light replaced by a sash window. On the north gable wall, the
remains of an original fireplace, now blocked, with a plain
timber lintel keyed for plaster.
In the attic a blocked fireplace is faced with old plaster and
has the damaged remains of decoration in relief: 2 trees with
part of a figure to one side and a horse's head between. Roof
without principal rafters; clasped side purlins .
The small C17 rear wing, which contains the stair, has a long
7-light diamond-mullioned window to the 1st storey and another
smaller window with diamond mullions in the apex of the gable.
In both cases the mullions are of small section and the
windows appear inserted.