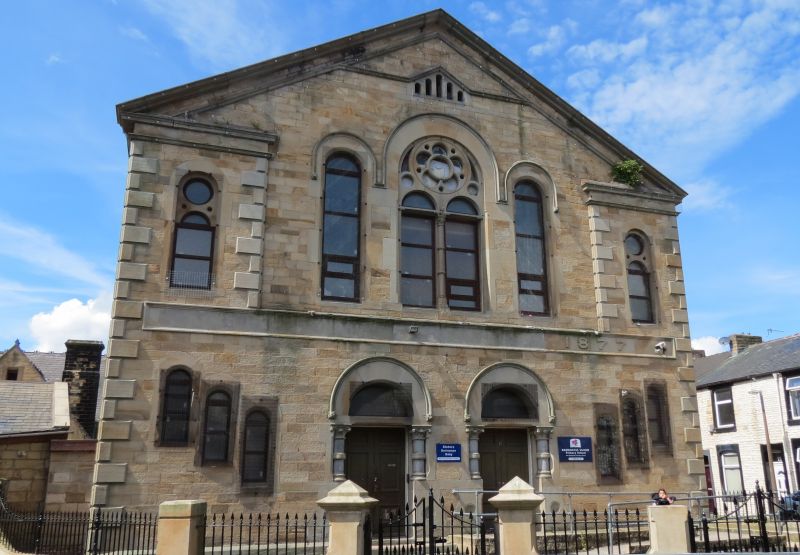 Baptist Sunday and day school with attached boundary wall and
railings, now mosque. 1878, altered. Sandstone ashlar, slate
roofs. C17 Vernacular style.
PLAN: E-plan formed by a main hall-range fronting North Street
with receding wings at both ends and in the centre of the
rear, the left wing coupled with a porch at the left end of
the main range.
EXTERIOR: single-storey, 2:1:6:1 windows, the wings and porch
taller than the main range; with a chamfered plinth, swept and
moulded sillband. The hall-range has 2-light mullioned windows
with chamfered surrounds and mullions; to the left, the taller
gabled porch, breaking the eaves, has an altered doorway with
tall mullioned overlight, and the gable of the wing to its
left has 2 tall 2-light windows, these 3 openings linked by a
deep hood-mould stepped over them, with foliated terminal
stops. The gable of the right-hand wing has one tall 3-light
window in similar style. Each wing also has a small 2-light
window in the gable, and all 3 gables are steeply-pitched,
with stone copings. The left return of the left wing (to
Altham Street) has windows of 2, 1, 1 and 2 lights
symmetrically disposed either side of a side-wall chimney; the
right return of the right-hand wing has 2 large 3-light
windows with deep hood-moulds finished with foliated stops.
INTERIOR not inspected.
SUBSIDIARY FEATURES: attached to the right-hand corner is a
low wall with chamfered coping which carries cast-iron spear
railings and columnar standards with urn finials, and has a
gate at the left end in similar style but with an arched
top-rail. The wall and railings have an eastward return along
Angle Street, ramping up to meet a short section of higher
boundary wall at the junction with the boundary of Angle
Street Baptist Chapel (qv).
Forms a good group with the parent chapel, sharing a small
triangular plot with it.