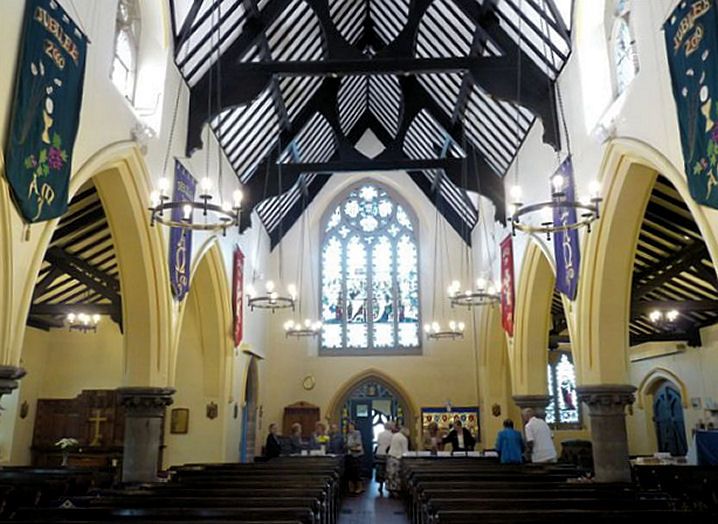 Church. c1867, by Medland Taylor; with baptistry added in C20.
Snecked rock-faced sandstone rubble with freestone dressings,
slate roofs with fishscale bands. Gothic style.
PLAN: nave, south-west steeple with broach spire, north and
south aisles, chancel with polygonal apse, south chapel and
north vestry.
EXTERIOR: the 3-stage tower, with set-back buttresses, has a
2-centred arched west doorway with cusped intrados, red
sandstone extrados, and a recessed door; a clockface to the
2nd stage; a belfry stage with chamfered corners and 2-centred
arched 2-light belfry windows; and a broach spire with
lucarnes in the cardinal sides. The west gable of the nave has
angle-buttresses, a large 2-centred arched 4-light west window
with lights quirkily cusped on one side only and a quatrefoil
in the head with unusual scrolled cusping, and below this a
rectangular flat-roofed C20 baptistry with segmental-pointed
windows of 1, 2 and 1 traceried lights and a coped parapet.
The nave has 2 tall gabled half-dormers in each side, all of 2
lights with differing multifoils in the heads. The aisles are
broad, of full height and buttressed; the 4-bay north aisle
has 2-light windows, alternately cusped and uncusped; the
3-bay south aisle has similar windows of 2, 3 and 2 lights,
that in the centre with cusped lights. The north vestry has
coupled gables; the south chapel has one gable to the south
and 2 to the east, all with 2-light windows which have simple
tracery. The apse has 3 double-chamfered 3-light windows, all
with cusped lights and trefoils in the heads but that in the
centre blind.
INTERIOR not inspected.
Forms group with St Andrew's School to the south (qv).