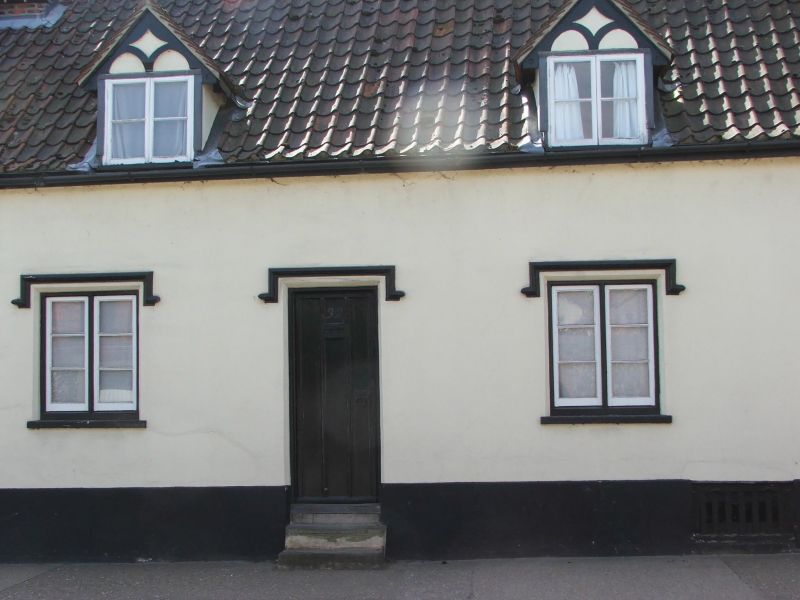 House, later a pair of cottages, No.32 now an office. Early to
mid C19 front, late C17/early C18 core. Timber-framed and
rendered; pantiled roofs.
EXTERIOR: single storey and attics; cellar. 3 window range:
2-light casements with horizontal glazing bars and wooden
hood-moulds. 2 doorways, approached by steps, have Gothic
panelled doors and wooden hood-moulds; a carriageway at the
south end has similar panelled double doors and hood-mould. 4
gabled dormers with mock timbering in the apex have 2-light
single bar casement windows and fluted bargeboards. A central
square chimney-stack.
INTERIOR: No.31 (not inspected) is said to have no exposed
timbering or original features visible. No.32 has a cellar
with mixed walling of flint, old brick and some clunch; some
C17 roof timbers. Little exposed timbering inside, but some
C18 framing. The 2 cottages are divided on the line of an
internal chimney-stack. Roof, partly in soft-wood, has clasped
purlins, saddles linking the tops of the rafters and a
ridge-piece to part.