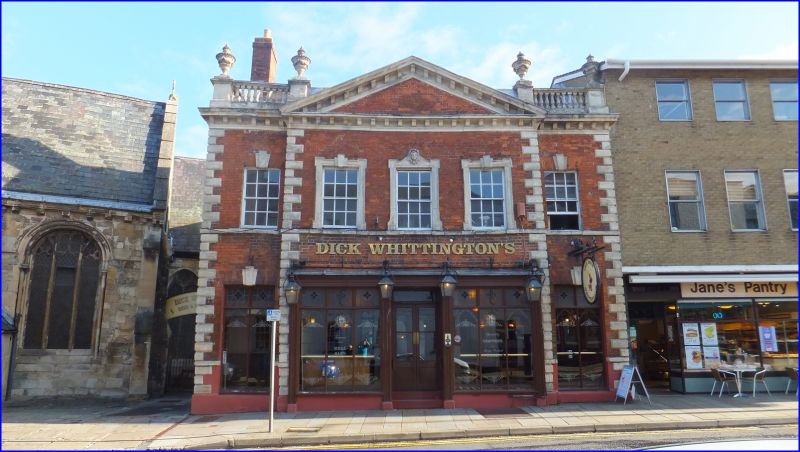 Merchant's house, later shop and dwelling, now public house.
Associated with and possibly built for the family of Richard
Whittington, Mayor of London. Late C15 with C16 alterations,
refronted for conversion to town house in early to mid C18,
altered in conversion to shop and dwelling in late C19, and
altered in conversion to public house with manager's
accommodation in mid C20. Timber frame, the front of brick
with stone dressings, slate roofs, brick stacks.
PLAN: front block a timber frame with outer walls rebuilt in
brick, a long timber-framed wing at rear facing onto the
former lane on the east side of St Nicholas Church and former
churchyard .
EXTERIOR: two storeys, attic and basement; symmetrical front
in a provincial classical style, of five bays with a slight
projection to the central three bays, raised and chamfered
quoins on the outer corners and on the corners of the central
projection, offset plinth. On the ground floor a stone sill
band mostly cut away for the insertion of later windows; on
the first floor a similar sill band, crowning entablature with
modillion cornice, pediment over the central projection with
modillion eaves cornices, and above the bay on each side a
stone balustrade with turned balusters and flanking piers with
moulded caps, each supporting a large stone urn with swags
carved on the bowl.
On the ground floor the central entrance doorway remodelled
and the windows in each bay on either side enlarged in early
C19 and framed by timber reeded architraves with paterae
carved on the corner blocks.
In the window openings early C20 mullioned frames with upper
transoms and with leadlight glazing in the upper lights, the
enlarged windows in openings with rubbed brick flat arches
which, in the side bays, are set with the original C18 raised
keystones. On the first floor three sashes in the central
projection in openings with eared and shouldered architraves

stone frames, with a sculpted head above a swag over the head
of the central window, and a raised, three-facet keystone in
the architraves of the heads of the window on each side; in
each of the side bays a similar sash in an opening with brick
jambs and a rubbed brick, flat-arched head set with a large,
raised, three-facet keystone, all the sashes with glazing bars
(3x4 panes).
The east side of the front block of plain brick, on the ground
floor a sash to left wth glazing bars (3x6 panes). The east
side of the rear wing is timber-framed in five bays above a
stone plinth with openings into the basement and with a
continuous first-floor jetty; on the ground floor, except
where removed or concealed by later oriel windows, the storey
posts and a central intermediate post in each bay are each
faced with a slender shaft cut in the solid which supports a
knee brace under the first-floor jetty; in the left hand panel
of the right-hand bay a C18 doorway with a semicircular
fanlight with radiating glazing bars; in the panel to right
and in two panels to left between the posts are C18 sashes
with glazing bars (4x4 panes), to left in the centre a shallow
oriel with two sashes and further left a canted oriel, also
with sashes, and supported on a timber bracket above an
entrance doorway to the basement, all the sashes with glazing
bars; the first floor is rendered, a shallow oriel to right
with a pair of C18 sashes and three similar sashes to left,
all with glazing bars (4x4 panes).
INTERIOR: on the ground floor most internal walls removed and
posts support timber bridging beams; joists and some wall
framing exposed in the wing; on the left hand side a mid C18
staircase in two flights with open string, curtail step,
richly carved foliage tread-end brackets, barleysugar
balusters and swept handrail; on the first floor, off the
stair landing a recess with the face of a wall to right has
been opened and framed to expose part of a decayed C15 or C16
wall painting, probably a townscape, on plaster; off the
corridor on the east side of the wing a room with a mid C17
panelled dado of which several sections have been removed to
expose a late C16 painted dado of fruit, flowers and foliage
on plaster, possibly the lower portion of a full height scheme
of painted decoration. Access not possible to other parts of
interior.
A very important late medieval town house, with C18
alterations of high architectural quality, which merits
detailed investigation: the C16 fresco decoration is a rare
and significant survival. Scheduled Ancient Monument.
(BOE: Verey D: Gloucestershire: The Vale and the Forest of
Dean: London: 1976-: 246).