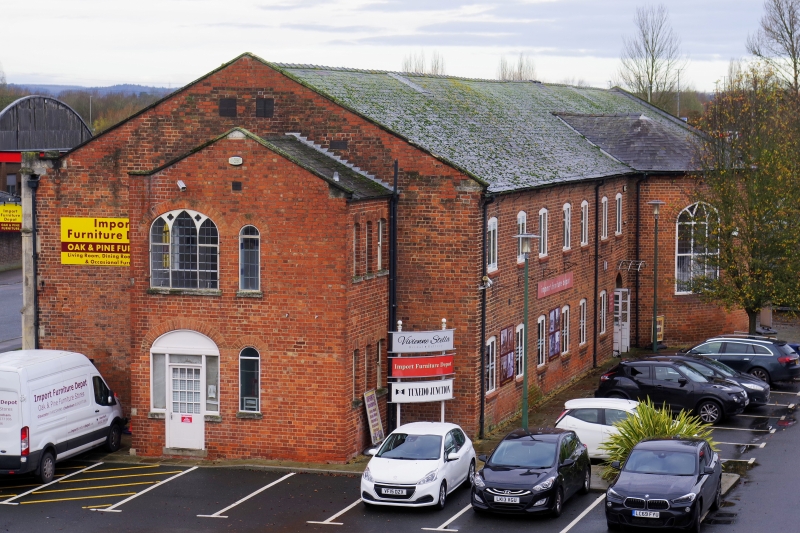 Almshouse, now shopping and craft centre. 1787-90. By William
Price of Gloucester for the City of Gloucester on site of St
Bartholomew's Hospital founded in early C12; minor late C19
additions in similar style; converted to commercial use and
chimney-stacks and belfrey demolished c1980. Brick, faced in
ashlar on the front, otherwise with stone dressings, gabled
slate roofs. Gothick style.
PLAN: a symmetrical cross plan with central, axial range and
long flanking wings; on the front of the axial range an
entrance porch now blocked, in the back of the range the
former chapel with semicircular apsidal end; the former
accommodation for inmates in the wings, now shops and offices,
with a small toilet block added at each end in late C19.
EXTERIOR: 2 storeys and full-height former chapel. Symmetrical
facade; on the front and sides of the central, gabled axial
range and the flanking side of each wing is shallow,
full-height, blind arcading, with triple-clustered shafts and
moulded pointed arches; on the wings rising from the central
shafts through the crowning string course and crenellated
parapet a thin canted buttresses probably intended to support
finials; at each corner of the axial range and wings are thin
diagonal buttresses.
On the front of the axial block three bays of arcading rising
in steps into the gable, in the wider central bay a projecting
porch with crenellated parapet, arched doorway, and on each
side wall a blind pointed arch; in the central bay on the
first floor a pointed-arched window with flanking blind arches
and in the side bays on each floor similar, smaller windows;
on each side of the axial range a wide arcade bay with
four-centred arch; on each floor in the side bay and in the
ends of both side walls adjacent to the wings is a
four-centred arched window. On each wing are six arcade bays
with four-centred arches, in each bay and in the ends of both
walls adjacent to the axial range on each floor a four-centred
arched window, all window arches with splayed jambs,
hoodmoulds and casements.

At the rear a brick dentil cornice, in the apsidal end of the
former chapel in the axial range are two large Tudor-arched
windows, each wing of six bays with a doorway in the bay
adjacent to the axial range and sashes on both floors.
INTERIOR: former entrance corridor, now blocked, led to a
central lobby with imperial staircase to the first floor;
double flights to each side with stone steps and cast-iron
balustrades of one baluster per tread of S profile, the
staircase is supported by a pair of cast-iron columns and
shallow arches with pierced quatrefoils in the spandrels; from
the central lobby on both floors axial corridors through both
wings, flanked by shops and offices converted from the former
almshouse rooms, and leading to the small toilet blocks at
each end; on the ground floor the corridors have exposed brick
walls and quadripartite vaults; in the former entrance
corridor and central lobby mosaic floors; the first floor
corridors have stone paving.
(BOE: Verey D: Gloucestershire: The Vale and the Forest of
Dean: London: 1976-: 240; VCH: The City of Gloucester: Oxford:
1988-: 351).