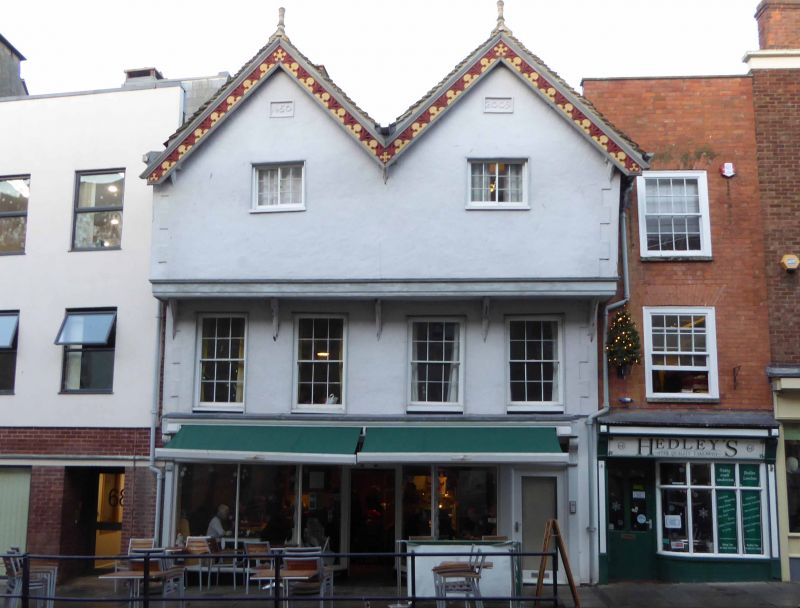 Merchant's house, later two shops and dwelling, now restaurant
and cafe. C15, upper floor remodelled with cross-gabled bays
in late C16 or early C17; later alterations principally in C18
and C19; conservation work carried out in European
Architectural Heritage Year, 1975, for Gloucester City
Council. Timber frame with some original wattle and daub
panels, gabled tiled roofs with decorative pierced tile
ridges, brick stacks. Two parallel, front-gabled ranges, two
bays deep, at right angle to street.
EXTERIOR: three storeys and cellar; symmetrical front with a
pair of identical gables; on the ground floor under the
first-floor jetty a late C19 shop-front with a central,
recessed entrance doorway; the shop-front, with slender
cast-iron framing and original C19 plate-glass windows, is
framed by pilasters with brackets at either end of the fascia
with cornice.
The first floor of 2 framed bays incorporating 4 windows
defined by timber storey posts with straight tension braces,
the feet of the posts and braces concealed by the cornice
above the shop-front; the braces and the intermediate rail in
each bay were cut for the insertion of four late C19 metal
sashes with glazing bars (3x4 panes).
The second floor represents a remodelling or heightening of
the original house around 1600; the second-floor jetty is
supported by a curved knee brace on each post and the exposed
ends of the floor joists; on the second floor close studding,
and above the intermediate rails in the centre of each bay a
C18 two-light casement with glazing bars (4x3 panes); in each
gable above the tie beams close studding and collar ties; both
gables have scalloped barge boards with shaped drop finials at
the feet.
INTERIOR: on the ground floor the framing of the wall between
the ranges removed and replaced by later supports, on the west
side the front section of the wall framing has been removed
exposing the surviving timber-framing of the east side wall of
a former C15 house subsequently demolished and rebuilt as
No.68 Westgate Street (not included); the C18 timber shutters
to the earlier shop windows now fixed on the side walls as
decorative features; on the upper floors exposed
timber-framing; at rear on either side of the framing of the

wall between the ranges, from first to second floors, is a
simple C17 or C18 dog-leg staircase; the second floor has open
timber roof over each range, each roof with an intermediate
truss with collar tie and several remaining curved braces; on
the wall panels and framing some evidence of C18 wall painting
in floral patterns; in the cellar rubble walling with later
brick walls inserted. Believed to have large bread oven in
cellar (not seen).