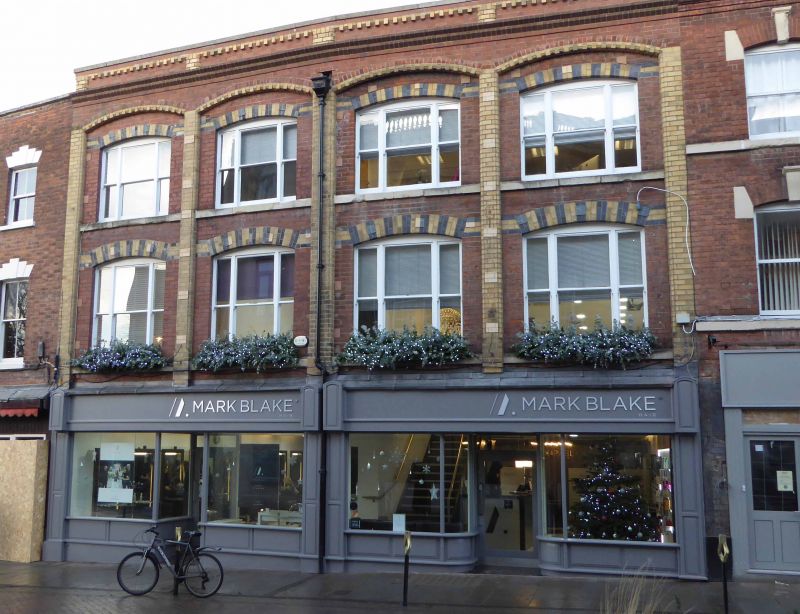 Pair of shops and former dwellings. No.76 incorporates
substantial and important remains of a late C14 merchant's
house built above a C13 vaulted undercroft to an earlier
merchant's house. Evidence of major early C16 alterations to
the house; converted and extended later as two shops and
dwellings, remodelled and extended further c1900. Brick,
timber frame, slate roofs and corrugated plastic roof.
PLAN: front range of c1900 with adjoining cross ranges or
wings at rear and the rear wing of No.76 encapsulating the
remains of the timber-framed, great hall range of the C14
house above an undercroft; the hall sub-divided in the early
C16 by the insertion of a floor and timber-framed partitions.
The rear wing of No.74 not inspected but may contain structure
earlier than c1900.
EXTERIOR: three storeys and cellars, the rear wing to No.76 of
two storeys and attic; symmetrical front has mid C20
shop-fronts, the upper floors of c1900, in red brick with
yellow brick details, and of four identical bays defined by
shallow recesses separated by narrow pilasters supporting
cambered arches with dentil moulding to the soffits, a
crowning cornice, and a panelled parapet with brick dentils
below the coping in each panel. On the first floor tall, plain
sashes with sidelights in timber frames and on the second
floor similar sashes with sidelights, all in openings with
segmental arched heads set in a voussoir pattern of
alternating brick colours.
INTERIOR: in No.76 on the ground floor C20 linings throughout;
on the first floor the exposed underside of the early C16
second floor inserted into the former hall wing has richly
moulded intersecting beams. In the attic are the surviving
elements of the three-bay open timber roof to the C14 great
hall which include, above the top of a later brick wall at the
south end at the rear of the front range, the timber-framed
south gable of the hall with three struts between the tie beam
and the collar tie, and the southern truss of two
intermediate, open trusses; the cambered tie beam of the
southern open truss and the top of the jowelled bay post set
in the west wall have mortices indicating curved braces which
formed an arch, probably a trefoil, with its crown cut into
the soffit of the beam with a double chamfered moulding; above

the beam a pair of angle struts to the principal rafters with
the struts and the soffits of the upper parts of the rafters
cut to form an open, central quatrefoil with ogee curves to
the bottom cusp; in the north bay on the east side a purlin;
the northern intermediate truss and the north gable rebuilt
probably c1900; much of the roof covered with translucent
corrugated plastic sheets on metal framing.
In No.76, below the front block, a rubble-walled cellar with
inserted brick walls which, at the rear, opens into the early
C13 vaulted undercroft below the rear wing, i.e. below the
former C14 great hall; the segmental barrel vault of the
undercroft is divided into three bays by dressed stone,
transverse, chamfered ribs which, on the east side, spring
from square imposts over scalloped capitals to short
wall-shafts set on moulded corbels, and on the west side, from
piers with chamfered corners; on the evidence of another wall
shaft on the east side the vault extended by at least one-bay
with perhaps two further bays below the former front range of
the medieval house; in the north end wall of the undercroft on
the left a dressed stone, round-arched doorway blocked with
brickwork, in the centre an original embrasure with dressed
stone jambs, and on the right a forced window opening with
splayed jambs.
The cellar under No.74 has coursed rubble walls with inserted
brick.
Although this represents a fragmentary survival of a
substantial medieval merchant's house, the C14 hall and C13
undercroft (embellished in respectively Decorated Gothic and
Early Gothic style) are of outstanding importance in a
national context.