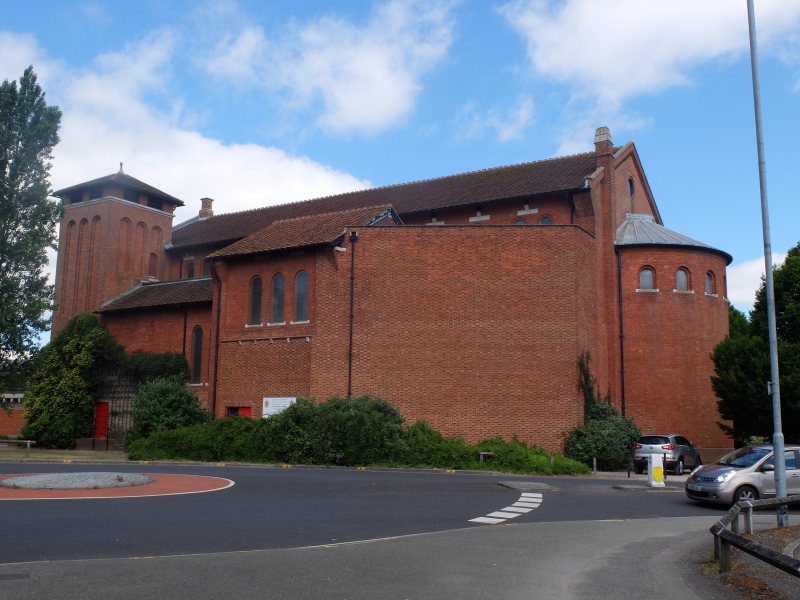 stone lintel with roll moulded head and side brackets, stone
band. 3 long recessed brick panels, each with gauged brick
rounded head. Centre recessed panel has moulded stone hood
with ornate brackets. 2 narrow round-headed windows over.
INTERIOR: arcades to 4-bay nave and south aisle have round
stepped brick arches supported on polished granite piers each
with large finely carved stone foliated capital, central
square pier and responds are similar but faced in alabaster.
North and south clerestory windows each side with 4 groups of
3 windows and group of 2 at east end, each with round-headed
brick arch, flanking stone pilasters with Ionic capitals and
recessed shafts. Leaded lights. East apsidal Sanctuary with
decorated rounded arch to west has Sgraffito work by G Heywood
M Sumner. This work depicts at top Christ in Majesty in the
semi-dome with a representation of the radiant sun in the top
of the dome and texts to the sides. Below are 6 large
medallions including Christian symbols. Along top part of apse
is a range of 7 high level round-headed clerestory windows.
Below is a range of Ovals with Christian symbols and below
this 7 figures of Evangelists and Prophets. At west end is a
timber gallery supported on 6 slim square timber columns with
moulded caps and curved supporting brackets. Stairs access to
right. Nave roof has 11 queen post trusses each with curved
intersection, boarded ceiling to underside of rafters. South
aisle has flat boarded ceiling.
FITTINGS: Pulpit designed by JH Ball 1902 and carved by Hoare
of Southsea. (Retrieved from St John's Church, Rudmore).
(Balfour A: Portsmouth: Highgate Hill, London: 1970-: 61, 62;
Lloyd DW: Buildings of Portsmouth and its Environs:
Portsmouth: 1974-: 130, 131; The Buildings of England: Pevsner
N & Lloyd DW: Hampshire and the Isle of Wight: Harmondsworth:
1967-: 432, 433, 434; Offord J: Churches, Chapels and Places
of Worship on Portsea Island: Southsea: 1989-: 7, 9, 10, 11).