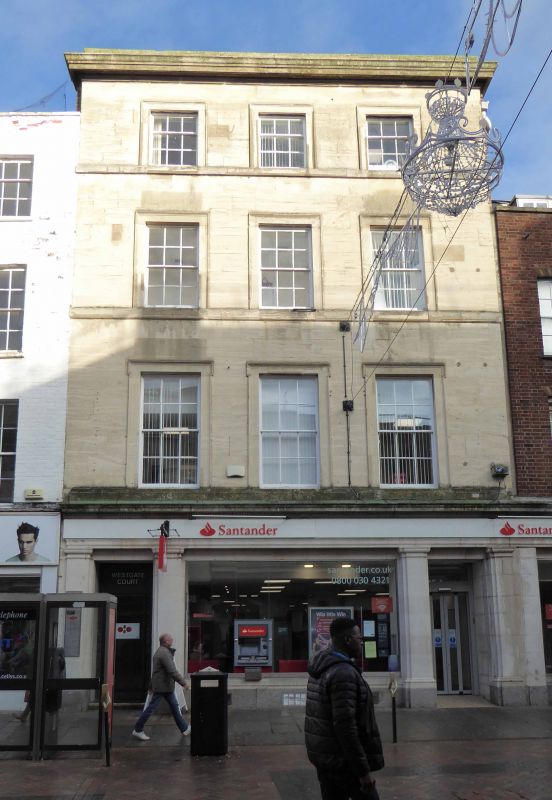 Shop and dwelling, now offices, linked with Nos 6 & 10
Westgate Street (qqv) as part of an integrated block of office
suites. Early C19 with early C16 structure encapsulated in
rear wing, later C19 and C20 alterations. Brick, the front
faced in ashlar, timber-framing in rear wing, slate roof
(artificial to rear), brick stacks. The front block
double-depth block, rear wing to left behind stairwell.
EXTERIOR: four storeys and cellar; the wing two storeys and
attic. On the front the ground floor remodelled in mid C20
with a large window flanked by doorway on right to ground
floor office and similar doorway on left to lobby entrance to
upper floors, all framed by stone pilasters and entablature
continued across the front of No.6 Westgate Street (qv) to
right; on the ashlar front to the upper floors a progressive
reduction in the height of each storey and its windows, with
continuous projecting bands at the sill levels and a crowning
cornice with blocking course; on each floor three sashes with
slender glazing bars (3x4 panes on the first and second
floors, 3x3 panes on the third floor) all in openings with
moulded stone architraves.
INTERIOR: the ground floor altered and refitted in C20; from
first to third floors an open well cantilevered stone
staircase with decorative cast-iron balustrade with reglazed
skylight above; some rooms on upper floors in the front block
retain early C19 cornices and joinery; rooms in rear wing
relined but in the attic office suite the exposed lower parts
of the timber trusses for an originally open C16 timber roof
of five bays, the trusses with slightly cambered and chamfered
collar ties, some timbers with mortices indicating reuse.
HISTORY: the rear wing may be part of the house built c1530
for Thomas Payne which included the rear wing of No.6 (qv)
Westgate Street.