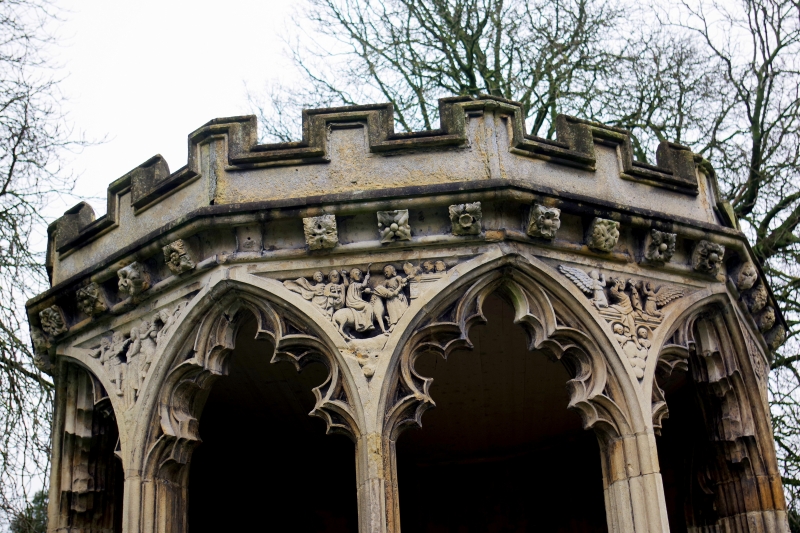 Gazebo. In its present form probably late C18; built
originally in the grounds of the former Marybone House near
the Quay re-using C14 arcading and other architectural details
said to have come from the King's Board, a medieval market
house which stood in the centre of Westgate Street and
demolished in 1780; moved from Marybone House to a garden in
Barton Street, then in mid C19 to the grounds of Tibberton
Court; given to the City of Gloucester in 1936 and re-erected
as a feature in Hillfield Gardens. Limestone ashlar with
moulded and carved details, flat composition roof.
PLAN: a small decagonal building; on the south side an open
arcade of five bays standing on a stone base above three stone
steps set in a semi-circle which stop against short wing walls
to east and west; the north side is a solid wall of plain
ashlar.
EXTERIOR: the reset C14 arcade has slender moulded piers set
on moulded bases and cinqefoiled arches with trefoiled
sub-cusps; the angles of the decagon occur at the crowns of
the arches where the joints have been re-cut to fit, each
double spandrel is a single stone crisply carved in bas-relief
with a scene of Christ's ministry: the Entry into Jerusalem,
the Last Supper, the scourging of Christ, the Resurrection and
the Flagellation; above the arcade a crowning cornice with a
hollow roll into which four fleurons above each double
spandrel and two above each of the responding end spandrels
have been inserted; the cornice and the rear wall a low
crenellated parapet with a continuous moulded weathering.
HISTORY: the King's Board is reputed to have been given to the
City of Gloucester by King Richard II and was used as a butter
market in the late 16th century. There is also a (doubtful)
tradition that it was used as a preaching pulpit. The site of
this building in Westgate Street was examined in a restrictive
survey by the Gloucester Archaeological Unit in 1991 when the
foundations of a rectangular building were identified in the
same position as an arcaded market building shown in Kip's

View of Gloucester of 1712.
(Transactions of the Bristol and Gloucestershire Arch.
Society: Medland MH: The So-called King's Board at Tibberton
Court near Gloucester: 339-343).