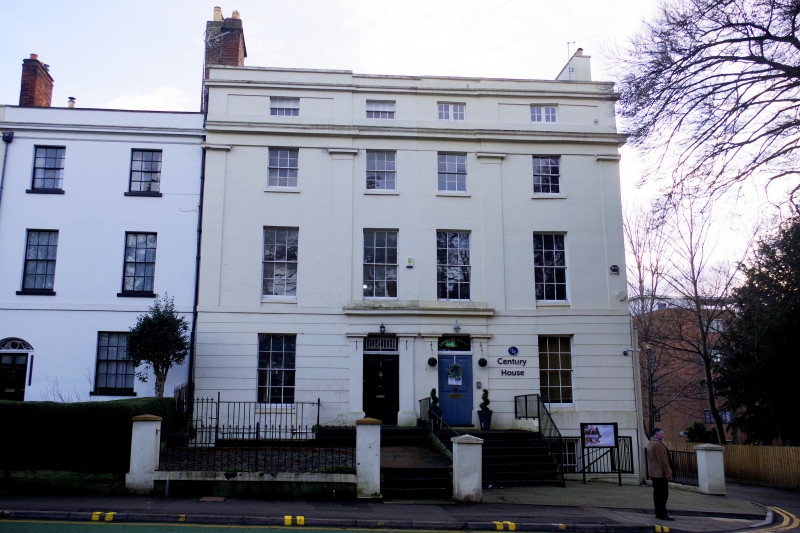 Pair of terrace houses, now flats, at west end of Hillfield
Parade. c1827. Part of a terrace development for Joseph
Roberts, printer. Painted stucco on brick, slate roof, brick
stacks. Double-depth block mirror image pair with rear wings.
EXTERIOR: three storeys, semi-basements with front areas,
attic storey. The front of the houses a unified facade of four
bays with slightly offset plinth rising to ground-floor sill
level and on the ground floor banded rustication capped by a
raised band at first-floor level, on the first and second
floors the bays to either side are defined by a giant order of
shallow pilasters with simple moulded capitals supporting a
moulded cornice and frieze band which break forward above the
end bays; the shallow attic storey with moulded cornice and
parapet also breaks forward above the end bays, with a shallow
recessed panel in both projections of the parapet; on the
ground floor in the centre of the front the two entrance
doorways are each framed by a pair of shallow pilasters with
capitals which support a continuous entablature above both. To
each side of the doorways a sash; on the first floor of each
house two similar sashes and on the second floor two shorter
sashes, all with glazing bars (3x4 panes), in the basement
area a sash with glazing bars (4x4 panes); in the attic storey
No.100 has two casement pairs and No.102 has two sashes, all
with glazing bars (4x2 panes).
INTERIOR: not inspected, but believed to contain original
features and joinery.