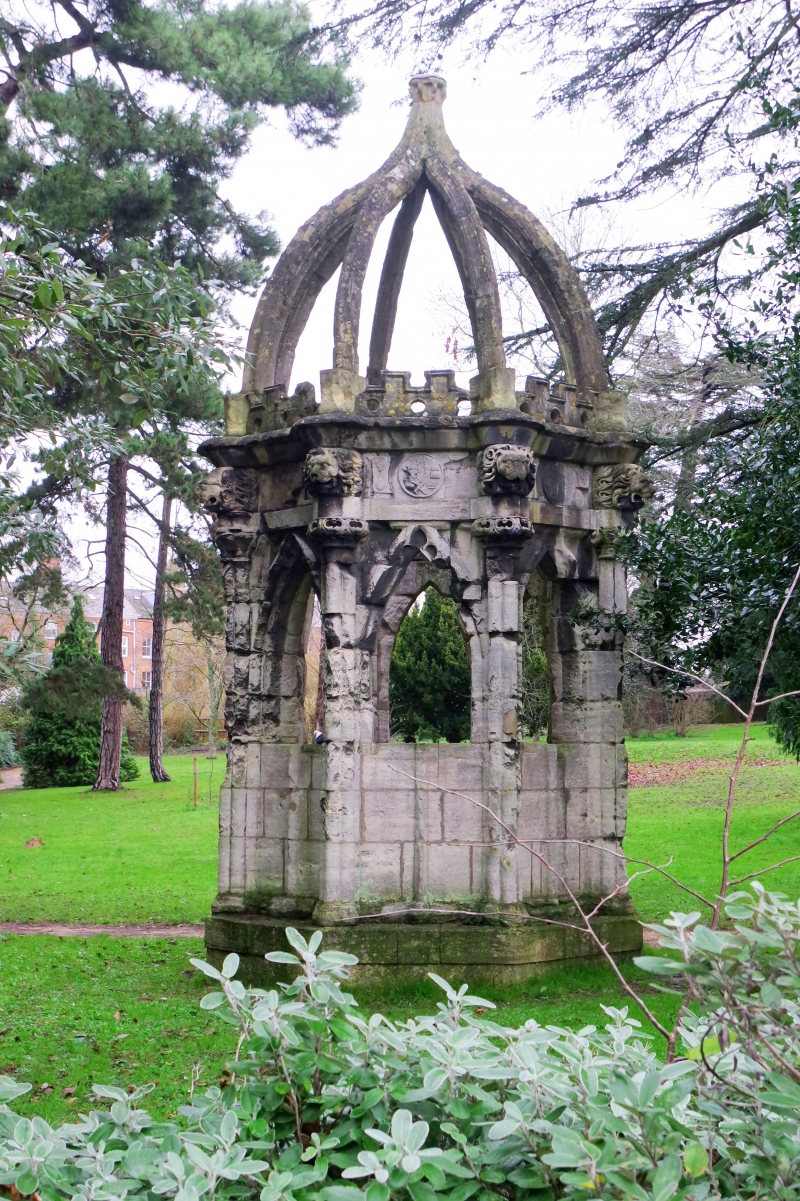 A conduit head, dating originally from 1636, carved and moulded in Jacobean style combining Gothic and Renaissance details, relocated elsewhere in the C18 and C19; since 1937, resited in a public park and rebuilt as a garden feature.

A conduit head, dating originally from 1636, carved and moulded in Jacobean style combining Gothic and Renaissance details, relocated elsewhere in the C18 and C19; since 1937, resited in a public park and rebuilt as a garden feature.

DESCRIPTION
The structure has a plain ashlar plinth of two courses on a later platform; there are triple shafts at each corner with moulded bases, and deeply-carved foliage capitals which support a crowning entablature and a miniature, crenellated parapet, pierced with circular openings. Eight moulded ogee ribs spring from the corners at parapet level, and are gathered to form an open crown capped by an elaborately carved finial, which formerly carried a statue of Jupiter Fluvius pouring rainwater on Sabrina, goddess of the River Severn. In each face between the triple shafts is a pointed arch, open above and infilled below, with a central shaft on the infill which may have risen as a mullion in the upper part of the arch. At each angle of the frieze is a boldly-projecting and vigorously-carved lion's head; on each face of the frieze, a carved medallion depicts one of the resources of the Vale of Gloucester. They include cider, wool, corn and fish; some are badly weathered. Each roundel is flanked by scallop shells.

Scriven’s Conduit was built in 1636 for Alderman John Scriven in Southgate Street, Gloucester, to provide the city with water piped from Robin's Wood Hill. The conduit head was removed in 1784 and rebuilt in a garden in Dog Lane on the east side of the city. In the 1830s, when the area was developed as the new Clarence Street, the conduit head was moved by Edmund Hopkinson to the grounds of his house, Edgeworth Manor. Finally, in 1937, it was given to the City of Gloucester and reconstructed as a feature in Hillfield Gardens that year. Hillfield Gardens was formerly the large suburban garden to Hillfield House, an Italianate villa built in 1867 which remained a private residence until the First World War, when it was used as an emergency hospital, and then as a Church House by the Diocese of Gloucester. Hillfield House (listed Grade II) was acquired by the City of Gloucester in the 1930s, becoming offices for the city and, later, county councils; the gardens were created as a public park, which included the surviving portion of the C12 former Chapel of St Mary Magdalene’s Hospital for lepers (listed Grade II*), an Italianate lodge and an elaborate balustraded gateway and flanking walls (both listed Grade II). To this ensemble, Scriven’s Conduit was added, together with The King’s Board (listed Grade II*), a relocated, decagonal, arcaded structure dating from the late-C14, formerly a preaching cross and later the butter cross; the whole group creating a miniature country house landscape in a suburban setting.

Scriven’s Conduit, an elaborate C17 carved stone structure, is listed at Grade II* for the following principal reasons:
* Architectural interest: the conduit head is remarkable for its elaborate Gothic form, and the quality and richness of its decorative and symbolic carving, which includes representations of the resources of the Vale of Gloucester;
* Historic interest: the structure was originally erected in 1636 as a conduit head over a piped water supply in the centre of the city of Gloucester;
* Group value: in its current location, in a public park, it has group value with the King’s Board and the remains of the Chapel of St Mary Magdalene (both listed at Grade II*), and the lodge and gatepiers (both listed at Grade II), all forming part of the landscape garden of Hillfield House (listed Grade II), now Hillfield Gardens.