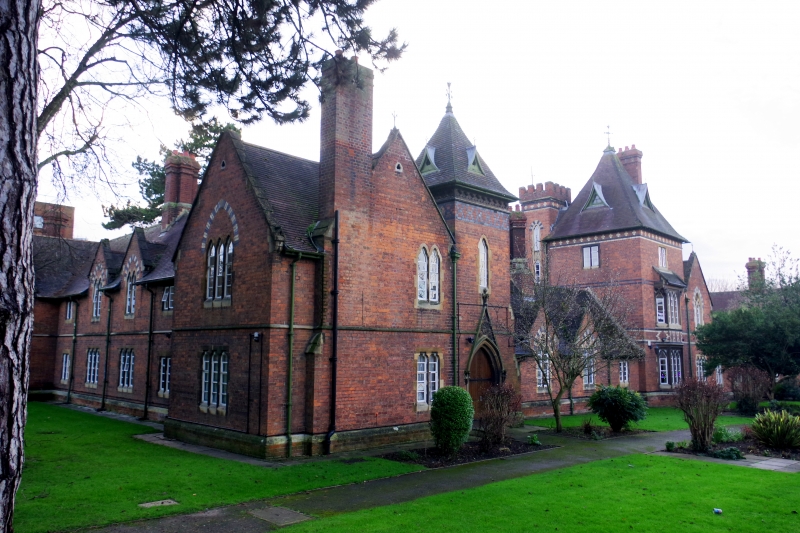 Almshouses. 1860-1. By Fulljames and Waller for the Gloucester
Municipal Charity Trustees to house the United Hospitals
formed after the amalgamation of the St Margaret and St Mary
Magdelen and St Kyneburgh Hospitals in 1861.
MATERIALS: red brick with decorative bands and relieving
arches in white and blue bricks, dressed stone frames to
doorways and windows, plain tile roofs with stone coped gables
and gablets with stone kneelers and finials, tall brick ridge
stacks and projecting stacks with single or double flues in
several patterns.
STYLE: Picturesque Domestic Gothic.
PLAN: long, irregular ranges on three sides of a large
rectangular court, a former range on the south side of the
court at rear demolished. In approximately the centre of the
north side the dominating feature is a large, square tower,
with a stair turret projecting from its southern side, and
flanked by a cross-gabled range on its western side.
EXTERIOR: one and two storeys with gable-end roofs, and tower
of three storeys crowned by a steeply pitched, pyramidal roof
with a lucarne on each face. The entrance front facing London
Road has a continuous offset plinth with a chamfered stone
coping; on the front of the tower and the gable-end wall of
the cross range to right at first-floor level, a decorative
brick band framing diaper panels below the windows; below the
eaves of the tower roof a decorative brick frieze; on the
front of the tower a central, two storey, canted bay window
with lean-to roof; on each floor of the bay timber-framed
casements of three front lights and single sidelights with a
trefoiled head to each light; on the third floor on each face
of the tower a central, double casement; in the gable-end wall
of the cross-gabled range adjoining the tower to right and on
both floors are stone-framed, pointed-arched windows with a
circular light in the head under a relieving arch of brick
voussoirs in alternating blocks of blue and white bricks.
To west of the tower is a single-storey range with two
two-light windows having details similar to windows in the end

of the central cross range with their heads within coped
gablets; further left a two-storey tower, its pyramidal roof
with a lucarne on each face, on the ground floor a
stone-framed doorway with moulded arch in a gablet with
finial, and on the first floor a single light window; further
left a two storey cross-gabled wall at the north end of the
east range, with projecting stack to left and to right, on
each floor, a two-light window.
To right of the central tower and cross range a single-storey
range with a central stone-framed doorway set in a projection
with the arch of the doorway raised within a cross gablet, at
each end of the range a two-light window with trefoil heads to
each light, and brick relieving arches with contrasting bricks
set in cross gablets. North gable-end of the west range, to
right, has on the ground floor a three-light stone-framed
window with Caernarvon arches in the head of each light, and
on the second floor a three-light window with trefoil arches
in the heads of the lights, and brick relieving arch as
described.
The long west range of two storeys, with on the west face a
short cross-gabled wing at each end; between the wings are
three tall, irregularly spaced chimney-stacks, on the ground
floor many two or three-light stone-framed windows and on the
first floor similar windows, the taller, two-light windows
adjoining stacks, with brick relieving arches set within cross
gablets. The east range, also of two storeys, has features and
details similar to the west range.
Within the courtyard on each side are single-storey verandas,
and on the first floors of the east and west ranges are
regularly spaced two-light windows, with trefoil-arched lights
raised in cross gablets alternating with short two-light
windows with flat heads.
INTERIOR: not inspected.
HISTORY: The building was built on the site of the former
Leper Hospital of St Margaret and St Sepulchure founded prior
to 1163.