Church of St Mary Including Church Rooms and Surrounding Wall 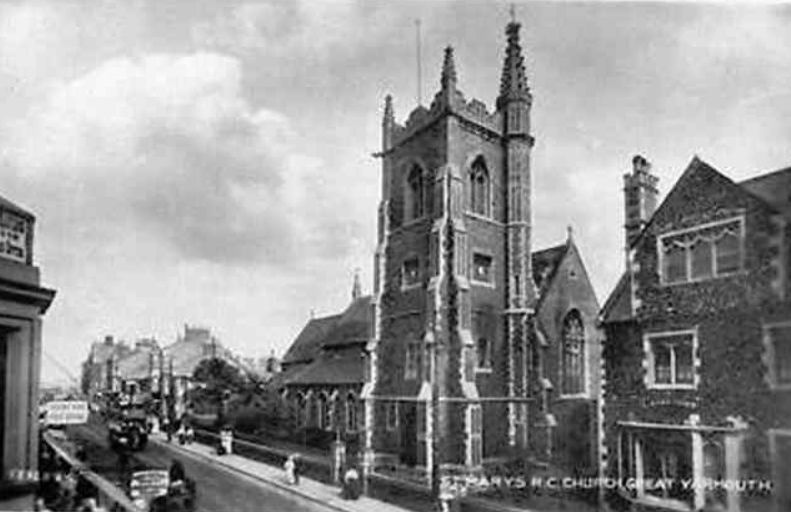 PLAN
Chancel to the east end and a tower to the west, nave and side aisles. Church rooms are added to the south and a presbytery to the west, also by Scoles in the same style.

EXTERIOR
The tower to the north-west has four stages with setback buttresses in flushwork. A pointed-arch doorway to the north, on the ground floor, has decorated spandrels framed by a stone hood-mould supported on the carved stone heads of St Edmund King and Martyr and St Augustine. The two-leaf wooden door has decorative strapwork. Above, at the first stage is a recessed niche with a cusped ogee arched head, containing a statue of the Madonna with the Christ-child. A one-light-cusped window is at the west elevation. The second stage has square pierced ventilation panels to the ringing chamber. Two-light belfry windows have tracery and latticed stone infills at the third stage. The polygonal stair turret to the south-west rises to a crocketed pinnacle. The double crenellated parapet has flushwork panel and lozenge decoration and corner pinnacles.

The side aisles under pent roofs have four two-light windows separated with flushwork buttresses, with two more to the Chapel of the Sacred Heart and the Lady Chapel at the east end of the north aisle and south aisles respectively. Above are four clerestory lights of encircled quatrefoils. The east chancel window has five lights also in the Perpendicular style.

Attached to the south-west of the chancel are church rooms of 1900, in flint with brick and stone detailing, linked by a covered walkway under a gabled slate roof.

INTERIOR
A stoup beside the main door remains in the porch. Double doors with decorative strapwork lead to the nave which has a barrel vaulted roof with a ceiling stencilled with a sacred heart and foliate motif in red and gold, incorporating 800 carved wooden bosses. A gallery at the west end supports the late C19 organ and choir-loft, beneath which is a freestanding sculpture of Mary cradling the fallen Christ. Arcades of 4 and 5 arches lead to the north and south aisles, supported on octagonal piers with moulded capitals and bases. Some mid C19 pews remain.

The chancel at the east end has a moulded chancel arch with engaged columns. A richly carved altar with figures of the Saints is by Scoles. The stained glass of the east window denotes Christ in majesty flanked by the gospels. Wall paintings appear to be of the late C19.

Along the west end wall of the nave, continuing along those of the north and south aisles, are panels depicting the Stations of the Cross in relief. At the east end of the north aisle, the Chapel of the Sacred Heart has a mid C19 polished stone altar incorporating a sculpture of the dead Christ flanked by angels. A brass memorial to Father Lythgoe, (the parish priest between 1852-1855) by Hardman and Co. is inserted into the tiled floor. At the east end of the south aisle is the Lady Chapel, segregated by delicate cast iron railings. The Chapel has an altar and a mural on the east wall and south walls dated 1921 by Archibald Jarvis depicting Our Lady of Yarmouth supported by scenes of local historic interest; the chapel ceiling is embossed with a motif in blue and gold; the gated altar rails are a memorial to Father Thompson.

Two windows in the south and north aisles have stained glass of c 1860 and 1890 attributed to Mayers and Co. The two-light window in the Chapel of the Sacred Heart depicting the death of St Ignatius and St Francis Xavier is of the 1850s by Hardman and Co. The pulpit was probably designed by Pugin and executed by George Myers, the font (by Scoles) and niche shrine of St Mary completing the ensemble; there is no evidence of a rood screen.

The church rooms have been remodelled and contain few historic fixtures and fittings.

SUBSIDIARY FEATURES
Surrounding the church and presbytery is a low flint wall with ashlar dressings and piers at intervals.

HISTORY
In 1824, before the Catholic Emancipation Act of 1829, the Jesuits started a mission in Great Yarmouth under Father Tate. Tate had purchased a house and warehouse in the old town for Catholic worship, but by 1841 the congregation had outgrown this accommodation and the new priest, Father Lopez, purchased land outside of the town on which the Jesuits would build St Mary's. Built at a cost of £10,000, the Jesuits commissioned one of their favoured architects Joseph John Scoles (1798-1863) to design and build the church and adjoining presbytery. Scoles had married into a Great Yarmouth family and designed a number of listed buildings in the town including St Peter's Anglican Church (later St Spiridion's Greek Orthodox Church) and Britannia Terrace on Marine Parade.

The church was opened on September 24th 1850 by Bishop Wareing, with a congregation of 800. It is little altered except for the addition of austere church rooms to the south-east in 1900. Some minor reordering to the sanctuary occurred in 1978 when the altar rails were removed (and re-erected at the rear of the church), the sanctuary floor was raised, the pulpit was lowered and the font moved from the rear of the nave to the north aisle. In the same year, sadly many of the statues were vandalised and restored by local craftsmen. The roof covering to the nave and aisles has been replaced with concrete tiles.

REASONS FOR DESIGNATION
St Mary's Roman Catholic Church, Great Yarmouth, of 1848-50, is Listed at Grade II* for the following principal reasons:
* Architecture: It is an accomplished piece by the renowned church architect J J Scoles, reminiscent of a medieval parish church, with meticulous detailing.
* Materials: The use of good quality knapped flint and contrasting stonework significantly contributes to the more than special interest of the building.
* Interior: Most contemporary fixtures and fittings remain including the altar by Scoles, the pulpit (probably by Pugin and executed by George Myers), the figure of the dead Christ in the Chapel of the Sacred Heart, stained glass by Hardman and Co and Mayer and Co. and the embossed and stencilled nave ceiling.
* Intactness: the historic fabric and layout of the church is little altered.
* Comparative Quality: St Mary's compares favourably with other Grade II* listed churches by Scoles including the Church of the Immaculate Conception, Farm Street, London (1844-49) and St Francis Xavier, Liverpool (1845-9).
* Group Value: The building has group value with the attached presbytery to the west, a Grade II listed building.